GENEROUS PUNK will take place on 30 November in Moscow 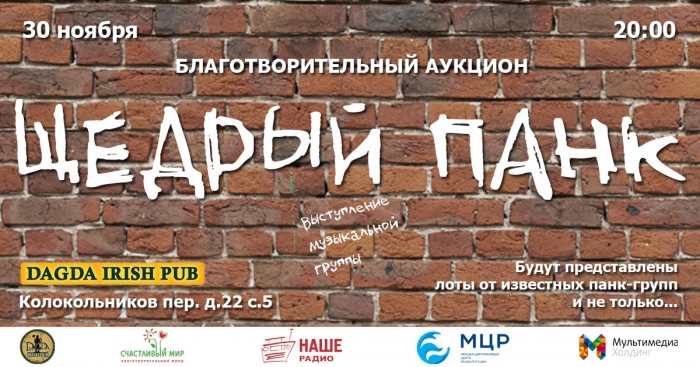 In Chistopol (resp. Of Tatarstan) living eight-year-old Andrew Bodrov. Life is not easy. As fate, he came to the orphanage... When he took the foster family, six months later, the boy's doctors discovered a brain tumor. Fortunately, she managed to remove, but the body of Andrew after chemotherapy severely weakened and he can hardly walk or run. For a boy it is vital to have regular rehabilitation courses that will help him regain strength and health.

Charity Fund "Happy world" with the support of radio station "Nashe Radio" and "Interdisciplinary centre for rehabilitation" (ICR-children) together with well-known punk and rock music holds charity auction #Megryan, which involves : Dmitry Spirin (Cockroaches), Dima Sokol (Eorsi), Lusine Gevorgyan (LOUNA), Mikhail Ryabov (MORDOR), Armen Grigoryan (the Crematorium), the group "Slot", Dmitry Borisenkov( Black Obelisk) and other Musicians put up for auction his most favorite things starting from music and ending with concerts with the possibility of passage of the backstage for a photo/autograph. Will also be a special lot from leading the "Our Radio" in the form of a certificate for 2 VIP ticket to the rock festival "Invasion" and t-shirts with autographs.

But that's not all! The event is expected known leading + musical guest.

The aim of the charity auction – to help Andrew Budarova to time vital rehabilitation. The amount of treatment is 171 200 rubles.

All funds raised from the charity auction will go on a rehabilitation course for Andrew.

The event will take place on November 30 in Moscow in Dagda Irish Pab at the following address :

Entrance to the event is free! Check the link https://blagotvoritelnyi-fond.ru/ofonde/akcii/blag...