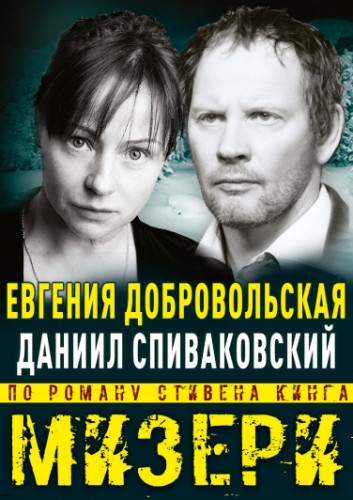 Masterful psychological Thriller based on the novel by Stephen king.

"Misery" is one of the most masterful psychological thrillers of Stephen king.

The plot works lie between the two characters in the book — a popular writer Paul Sheldon and psychopathic groupie Annie Wilkes.

The owner of a popular in the literary environment the names of Paul Sheldon, author of novels about misery, after a terrible accident, is captured by a fanatical fan.

His life is in serious danger. Manic idea Annie make Paul his "manual writer" and her pathological love, bordering on nightmarish insanity.

Paul needs to write a new book, which now affects his life.

On the stage the novel by Stephen king takes on new meaning. It is a fascinating combination of an action Thriller and a psychological drama.

In the centre of the play is a tragic story about two people that exists without time and space. It can happen with anyone anywhere and it makes it even more eerie and exciting.

What does it mean to be someone's fan? What it means to have fans, and what this could lead?

We will try to answer these questions, a brilliant story of the legendary king will help make this research an exciting and a memorable one.