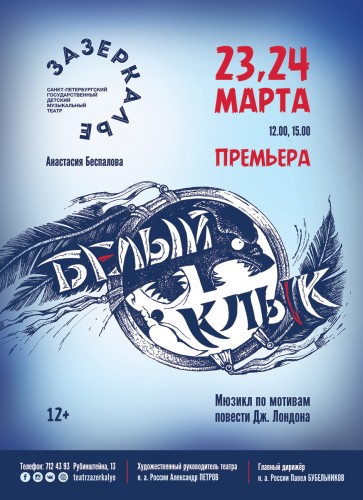 On 23 and 24 March in the theater "Zazerkalie" will be the first Russian production of the musical "White Fang", created by the adventure novels of Jack London. Harsh, with a touching and romantic story londonskogo wolf-blood, full of dramatic conflicts and unexpected plot turns, was a great basis for the musical a talented young composer Anastasia Bespalova and famous playwright of the Lion Yakovlev.

"White Fang" is a play about manhood, about the formation of character, the nobility and devotion, about the transforming power of love. The son of the wolf and dog, White Fang is a metaphor for the soul of any living being open to evil and good: the callousness and brutality of spawn and spawn hatred, but love and trust are capable to appease even the most ferocious disposition.

The atmosphere of the play, the magical and the terrible, enlightened and timid, it creates an expressive and original melodies, sharp rhythms, the skillful stylization of Indian songs and shamanistic rituals. And of course, the artistic solution of the play, made famous Tuvan artist Nachyn Shalyk. The impressive set design was concise, imaginative and one - piece incorporates elements of the ethnics of the Northern peoples.

The performance of the theatre "Zazerkalye" contains both leading and young artists of the theater, which under the guidance of Director Olga Furman will give a happy life on the stage the new musical Anastasia Bespalova.

Viewers of "Alice in Wonderland" Anastasia Bespalova known for the performances of "Teremok", "tithe-havroshechka" and "a Forgotten birthday", first staged in "Wonderland" and created by the composer in close contact with the theatre. In October 2018 at the IV International open contest of composers "Peter and the Wolf" in Ekaterinburg of the jury, headed by Alexander Tchaikovsky Bespalova was awarded the II prize and the audience awarded Anastasia the audience award. The performance was staged in the framework of the Federal party project "Culture of small Motherland".