Performance "Giselle" on October 13 in Moscow 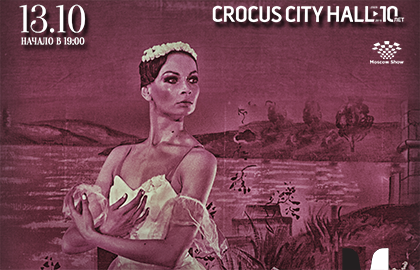 The ballet theatre of classical choreography La Classique will present the play "Giselle" in Crocus City Hall. Accompanied by the Orchestra of the Moscow theatre of ballet under the leadership of Yar Tkalenko.

Ballet theatre of classical choreography La Classique celebrates 30 th anniversary season. Over this time there have been more than 10,000 performances around the world, the richest repertoire allowed the theater to become one of the most recognizable in Europe and to earn the recognition of the audience in England, Italy, Switzerland, France, Austria, Norway, China, Taiwan, New Zealand, Australia, UK, Ireland, Egypt, Poland, Gabon, Argentina, Brazil.

On the stage of Crocus City Hall will be presented the play "Giselle". The two-act ballet "Giselle" is a fantastic story, created by three librettists Henri de Saint-Jorgen, Théophile Gautier, Jean Coralli and composer Adolf Adan according to the legend, which was retold Heinrich Heine.

Russian audience first saw this story about tragic love in 1884, the Mariinsky theatre, then "Giselle" performed by the great Anna Pavlova. The ballet "Giselle" is an old Slavic legend about the Wilis - women who died from unrequited love. The main characters — the peasant girl Giselle and count Albrecht, who love each other.

The art of the theatre La Classique, organized by Elik Melikov in 1990, is well known to ballet lovers around the world. The troupe toured constantly, because the main goal of the team is to popularize Russian classical ballet outside of Russia, the theatre's repertoire includes such masterpieces of classical ballets as "Swan lake", "Nutcracker", "Sleeping beauty", "La Bayadere", "Romeo and Juliet", "Giselle", "don Quixote" , "Paquita", "the Walpurgis night", etc.

A distinctive feature of the theatre La Classique is the ultimate costumes and decorations that are made in a single copy, they are completely unique. Elik Melikov is a certified artist, one of the first in the country founded the theater workshop. He created scenery, costumes and shoes for the most famous theaters — Bolshoi theatre of Russia, the Moscow ballet under the direction of Victor Smirnov - Golovanov, the Danish Royal ballet, ballet Theatre of Boston.