Generation Z learns the "Secret of the Moon" 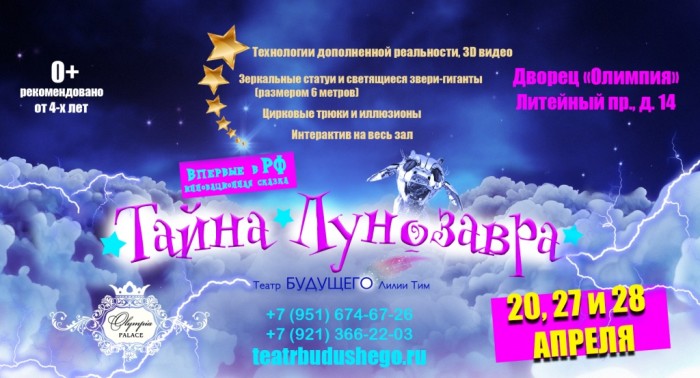 Love to uncover secrets and make discoveries? Hurry up to see "the Mystery of Lunsar" - acclaimed show "Theatre of the Future Lily Tim", which has already seen 20,000 children!

"The mystery of Lunsar" - is an impressive technological show where connect game artists, modern 3D technology, acrobatics, spectacular costumes and professional light. This is a show for kids generation Z, which do you prefer digital, motion and interactive. Interaction with the audience - please cognitive elements, of course, involving all the senses - a must!

It is important that the performance is safe even for the youngest audience: it is designed in conjunction with child psychologist, who participated in the creation story.
Director Liliya Tim notes: "the Mystery of Lunsar" is an honest tale with a happy ending. Come to our Theater of the Future! Thousands of children and adults met Loosefrom and remained delighted with him. Now they are all waiting for the continuation of this tale. And we have been rehearsing," she says.

Imagine a magical nature reserve in which they live fantastic beasts: Lunsar, Octopus-Spider, tiger butterfly, Chameleon, Rooster, Flying cat. They invite you into their mysterious world, show miracles of dexterity and ingenuity, frighten size or color, fascinating beauty. What to do if you suddenly grow a giant "black widow"? And if there will be a flying cat? Many secrets hide the fairy reserve!

Live mirror of the statue glow by themselves and actually exist, the peacock tail hidden secrets, and can fly without even leaving the auditorium! A spectacular interactive show "the Mystery of Lunsar" takes you into the wonderful world of nature is full of sound, light, color, amazing tricks and real magic. Huge multimedia screen instead of the back of the stage, video projection - directly into costumes, huge and vivid characters, and most importantly, a touching and heartfelt story, where Lensafrik travels in search of his mother.