Play "CROC my heart" on 13 July in Saint-Petersburg 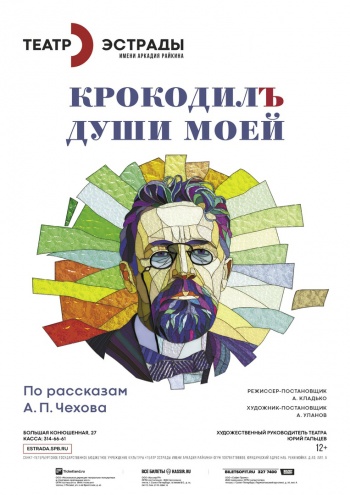 "If you are afraid of loneliness, don't marry"

This paradox from the notebook of Chekhov is not familiar to any of the characters of a new show Variety Theatre "the Crocodile of my soul". All men and women, young and old - think the other will save them from boredom, meaninglessness and loneliness. All of them grab for each other, stick to each other, dancing and fighting with each other. And eating each other eating.

Carousel of narcissistic dandies, lovers, coquettes, moralists, matrons, fathers of families twists every minute of the action faster. Figures resembling photographs from dusty albums, whirl in a familiar routine, and facing each other. During these clashes, with all his small forces hope that the other will fill the gaping inner voids that the other will take the fear look in the face. So as not to see your own boxes and broken hopes.

In contrast to the intelligent author with a hat and pince-nez, the characters of Chekhov's short stories do not know what next to others of their loneliness becomes even more painful. And the meaninglessness of existence is multiplied.

In perky young hope for unconditional happiness, they sing a comic song and gospel, rap and parody TV, but experienced by the viewer, after watching "Gulls" and "Cherry orchards", knows what will happen when decreasing loud music. Again somewhere (maybe souls?) you will hear the sound of a broken string. All becomes clear, again nothing was wrong and nowhere to go. But to say it sobbing, just gone to call his beloved "honey".

"My darling insect", "cachalote my dear", "my horse dog" and finally, "the crocodile is my soul". So in correspondence Chekhov called his bride, and then wife, the actress of the Moscow art theatre Olga Knipper-Chekhov. These nicknames - the irony, the joy of creative play and authentic feel.

Irony, imagination, longing for love and became the motor of the carousel - play "Crocodile my soul"

Director A. Kladko about the play:

All have long known how to put and play by Chekhov. Today, even know how do NOT put and do NOT play by Chekhov. I personally do not share performances on modern and NOT modern. "Terry" and "ultramodernui or postmodern". In my opinion all these formulations do not exhaust the phenomenon of. As there are no two identical people on earth, so there are no two identical performances. If we see the statement, classic sets and costumes, and the sound of her shrill today. And no one from the audience leaves no one indifferent. Audience laughing and crying. And go in thinking about his life today. It is what play? "Naphthalene"? Or, on the contrary, the design of the radically unusual. Some surreal ultra.....neo....post... etc. etc. And the performance doesn't make any difference, does not touch today's audience. Not opened the subject, does not feel the electric arc between the hall and the stage. This is what play? Modern? I doubt it. Tovstonogov said: "Put hamlet in jeans, does not mean to make it modern!" I think that Georgy was right. The concept of "modernity" does not fit in a torn (or torn!) jeans. It is much wider and mnogosloinoi. The play "the Crocodile of my soul." - the performance is largely experimental. This is an attempt to combine the 19th and early 20th centuries with the 21st century. Young actors of the Variety theatre decided to challenge myself. There was a desire to find its not "plush" by Chekhov. And at the same time, combine it with a stage. Not an easy task. My role was more modest. Be their first audience. See, that is understandable, what is not clear? Where is boring, and where conversely, the "salty" jokes! And ...not to interfere. Do not push his authority.

Chekhonte stories of different genres. They were written in the period of the writer's life, when he still sought his own style, his handwriting, his intonation. This gave rise to a kind of eclectic performances. Eclectic – too genre. Perhaps one of the most difficult. And so, one of the most interesting and intriguing. How to connect the grotesque, domestic drama, skit, eccentric, parody, lyric Comedy, satire, farce, and the stage that was not visible seams? And so, despite fragmentation, the performance remained solid piece of art? That the pulse was modern, and the atmosphere of Chekhov? To watch it was interesting and the younger generation, and adults? Sophisticated and unaware of anything about Chekhov? There are no answers. As we did, will tell the audience. But this colorful kaleidoscope of genres, stories, destinies, and doing this show is not like other Chekhov plays. It is this complexity ourselves creative problem provoked the young artists to go for this no one hounnou the road. Perhaps historians of the theater I will say that someone once something similar has already been done. It is quite possible. But we did not have purpose someone to compete. In art in General, I think it's not appropriate. For us, this road is new. And our path was fun! I hope that the viewer will be too.

Duration: 2 hours 40 minutes with one intermission