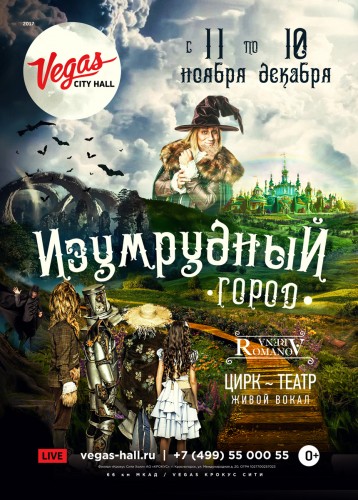 Premiere! Visiting the shows of fascinating musical and circus performances "emerald City" to Vegas city Hall from 11 November to 10 December 2017, viewers will be able to become real wizards and help favorite characters to find kindness, courage and ingenuity

Family show "emerald City" based on the famous tale "the Wizard of Oz", tells a touching story about the incredible adventures of Ellie and her friends, will appear in a new incarnation – musical-circus show! A fascinating show with spectacular circus, bright vocals, the original animation effects and the colorful costumes are meant to dispel the autumn Blues and inspire not only children but also their parents.

The plot of the play hurricane carries Ellie in an unknown country, where she encounters fabulous characters: the Scarecrow, dreams to the mind instead of straw, the tin man seeking a heart, able to love; of a Lion, suffering from cowardice. Adventure full of unusual events, all sorts of obstacles on the way, the machinations of the evil and treacherous Oorfene juice. Helping out and supporting each other, Ellie and her friends can easily pass through all the obstacles that seem absolutely insurmountable. In the finale the characters reach their goal – the emerald City, where they meet a wise Goodwin. A good wizard gives the characters not only desirable traits, but also explains that the main gift of the trip was a real strong friendship.

Circus-based shows make up the numbers submitted by the best performers-winners of International Circus Festival in Monte-Carlo – acrobats on teeter boards, the winners of "minute of Fame", the soloist of group "grace" – gymnast-rubber, trapeze artists on cloths, working without insurance, acrobats on rollers, gymnasts on track.

It is worth noting a strong vocal part of the representation: all parties are executed by the artists live, the solos: in the role of Ellie – Anastasia Dyatlova, a young participant of competitions "the Voice. Children" and "the Blue Bird", as Goodwin – soloist of the first trains of the Moscow musicals of Vladimir by dyibsky.. Original music for the production was written by a young composer Andrey Prong, known for his work with many popular productions and artists of the first magnitude.

The peculiarity of the play "emerald City" in the harmony of all components – circus, theatre and music are connected in an equal and augmented 3D graphics, animation and cinematic special effects. In the formulation introduced video screens, with a total area of over 200 square meters! All components of the performance, from costumes and makeup to animation and music have been designed exclusively. The producers of the show – the creative team "Romanovna" specializiruetsya on the creation of an original Russian circus performances, competing with renowned Western counterparts. After lengthy auditions, months of rehearsals and collaboration with a large number of professionals from costume designers and make-up artists, to composers and artists around the world – "emerald city" is ready to open doors for all people to believe in fairy tales and fascinate every viewer!

* Children under 4 years can pass under one ticket with adults and to sit on his lap.

Vegas City Hall – a multi-format venue for the whole family on the territory of Crocus city. The concert hall is located in the SEC "VEGAS Crocus city" in a 3-minute walk from the metro station and has a direct transition of free surface and underground Parking for 3000 places. Well-equipped cozy room equipped with comfortable chairs, arranged in tiers, which allows you to comfortably enjoy the show from anywhere. The youngest guests will be able to literally "touch the hand" the characters of the play.

Tickets at no extra charge for the show "emerald city" in Vegas City Hall can be purchased online on the website www.vegas-hall.ru and in the box office Crocus city Hall, and book by telephone call-center: 8 (499) 55 000 55.