The Quartet And "In the second principle something there..." - the performance encore! 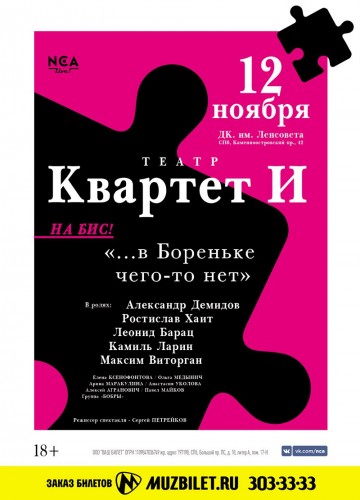 Date:
12.11.2017 19:00
Venue:
Palace of culture named after Lensovet, PR-t Kamennoostrovskiy, 42, Saint Petersburg
A visa is required:
for Russian citizens is not required

Movies, cartoons, books, collaborative projects with the stars of Russian rock-n-roll – all in some moment was nearly overshadowed the main point: "the Quartet And" – first and foremost, theatre. And with great success the St. Petersburg premiere of the play "...the second principle something there", November 12, theatre "the Quartet And" will present its production of encore! The main role and it is not the role of Berenice play Maxim Vitorgan.

Unlike previous works, the Quartet "Conversations middle-aged men" and "Letters and songs of middle-aged men", where the artists communicate with the viewer as their own face, but the story seems almost random chain of memories and reflections here will be all that is necessary in the theater: plot, characters, conflicts...

Maxim Vitorgan will stand in the way of a successful film Director who suddenly realizes that dead tired from bringing money series "about cops and criminals" and decides to create a movie that always wanted to make – about yourself, about our time and human relationships, for that time typical. And his fellow screenwriters, cameramen, actors, make-up artists and Pareja play Paul Mike, Elena Ksenofontova, Alexei Agranovich, Ukolova, Anastasiya, Olga Medynich, Arina marakulina and group "Beavers". Performance Director – Sergei Petrakov.

Well, a bit of direct speech – observations and conclusions whether the characters in the play, whether the authors

Leonid BARATZ, "This generation is losing ground "on all fronts"... unless you count the main well-being and success, we have them, just all right. But with "burning" and "self-realization" – a very so-so..."

Rostislav CHAIT: "the second principle? This is my character Boris Naumovich; he is the Director of the film, which takes max. He was asked why he did not become a Director, and he explains that...":

BORIS NAUMOVICH, Director. ...the ninth grade, in my thoughts, of course, only cinematography... and come visit... while we were be healthy! and, they say, well, what, another Director growing? And dad said, "no no, this "bloody" bread Borka I definitely do not want. And then, to be a Director, it is necessary that the person had something". And I once and for all understand that I was something there. True, never understood why. But, apparently, dad was right. Because if it was, I would have spit that it is not, and became a Director. But I didn't. So no.

So on November 12 get ready for author "quartesolo" psychoanalysis: see you at the show "... in the second principle something is not" in DK. Of the Leningrad city Council.

Ordering tickets by phone 303-33-33 and on the website www.muzbilet.ru

The details in the VC: https://vk.com/spbkvarteti