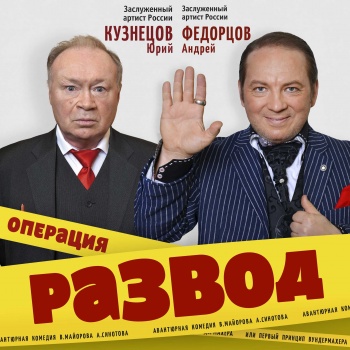 Sparkling and bright Comedy. The action takes place during the day in the living room of the mansion Mokhnatova with your favorite artists, known for numerous roles in movies.The cast:

Spy passions are, the plot thickens more and more, and all this action is spiced up with sharp jokes and on politics, and on General topics. There is in this play and something of a detective, and something dramatic, but the bright comic talents of each of the actors turn everything that happens in a real hilarious grotesque, worthy the best samples of world cinema, created in the same style.

Excellent acting, a fascinating story on a rather topical theme, excellent sets and costumes, in a word, those who buy tickets to the show "Operation "Divorce"" will not regret the time spent and will get pleasure from this easy and dynamic performances.

Both parts of the play interesting, but the most dynamic and vivid action awaits the spectators, of course, closer to the finale, but the outcome will be quite unexpected for many.