The show of Ilya Averbukh's "Alice in Wonderland" 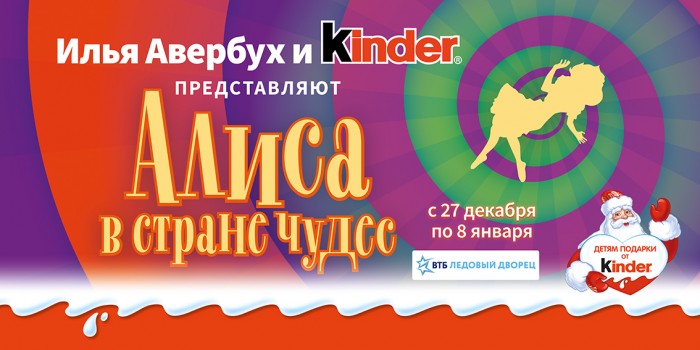 In the Christmas holidays , the Production company of "Ilia Averbukh" and Kinder® present a new large - scale project- a Christmas play for the whole family "Alice in Wonderland", which will be held from 27 December 2017 8 January 2018 at the ice Palace VTB.

Ilya Averbukh proudly notes that the project will be the most high-tech of all the previously created Christmas ice show, it will be used all surfaces of the room, including the ceiling.

Starring will perform famous Russian figure skaters, Olympic champion and Sochi 2014 Tatiana Volosozhar and Maxim Trankov, the gold medalist of Nagano Ilia Kulik and others. One of the major surprises will be the performer of the role of Alice Averbukh her watching among young athletes from the current national team. Viewers will be able to see the elements of high complexity and highest level of figure skating on the level of the best skaters of Europe and the world. The name of the performer of the role of Alice is kept secret and will be announced after the start of rehearsals.

Ilya Averbukh: "Every Christmas season I try to surprise the audience. In the past year with great success was "Nutcracker and the Mouse king" is a classic work which was very interesting to implement on the ice. Now I wanted to go for another girl – Alice to enter her world full of wonders, where you can truly give the freedom and flight of our own imagination, and it will be organic. I really wanted to put "Alice", but I felt that it is not yet time to implement it because it must be very surreal and high-tech. After I put drama on ice "Romeo and Juliet", I felt that the time has come. Now you can take and keep "Alice". It will be incredible beauty and wonder of the show. I plan to use all surface of the room, including the ceiling, we will make a stunning 3D-mapping, add a lot of complicated circus acrobatics. It will be very surreal, but "Alice" is a new year, a kid-friendly story, truly fabulous. New year I want to put it story."

For surrealism in the project will meet one of the coolest video engineers of today creative Director of the company "H3oConcepts" Nawar Bitar (Nawar Bitar) from the United Arab Emirates. It is well-known to Moscow audience on a big projection show on the Bolshoi theatre (2014) and General staff (2015) in the framework of the festival "Circle of light". It is also known worldwide for its architectural mapping called "silk road" on the building of the Emirates Palace in Abu Dhabi (2011), an incredible show at the opening of the tallest skyscraper in the world Burj Khalifa (2010), mapping the Tower of Kuwait during the celebration of independence Day (2016), as well as mapping of the Vivaldi Museum in Venice (2017).

Nawar Bitar: "I created the video projection and 3D mapping for the most famous buildings in the world, but I've never worked with set design for figure skating. Seeing "Romeo and Juliet", I was shocked, I am very interested to work with the legislator of the fashion world in ice shows. Ilya Averbukh impressed me with the grandeur and scale of the project. However, I was impressed with the fact that he gave me almost complete freedom of action. I am proud that I will be working with Olympic Champions, and I'm sure it will be an amazing show".

The stars on ice show of Ilya Averbukh's:

Alexei Nemov: Ilya is one of the best Directors of our time, all children-members of his show — a huge well done. You can see how they grow an actor from project to project. Of course, his shows are huge success with the audience, and I really hope that Ilya as the Director will be happy fate not only in Russia but also abroad.

Tatiana Tarasova: Ilya Works absolutely fantastically, his team reaches the phenomenal level of skill. Every show is a unique celebration! Ice productions. very strong and emotional. All the artists each play work in recent times, I have seen this only in the ensemble of Moses! I'm glad Ilya continues the work of this great show on the ice and looks for his only way.

Svetlana Khorkina: I advise Everyone to go with the family to the ice show of Ilya Averbukh's because it is, above all, professionally and flawlessly from the point of view of figure skating, secondly, it is colorful and really atmospheric.

Ivan Skobrev: I Advise all dads to attend to pre-purchase tickets for the ice show of Ilya, because good — like the ice hockey world championship — will have spread quickly. I think that all viewers will be able to recharge with good energy that helps to spend new year's eve in a very good mood.

Marat Basharov: We go to the show Ilya Averbuch whole family, primarily because they take part in our Olympic Champions, world Champions and Europe, such a constellation anywhere else. Secondly, it is always a beautiful scenery, lighting, sound, costumes: Ilya is a huge team of professionals in the light and costume - I know for myself, I have often worked with these amazing people. Third, Elijah himself is a very versatile man - he is not only a skater, choreographer and Director, but also well versed in music, in theatre. Coming to each of his performances, I wonder how he put on the ice the material.

Show Ilya is not just a beautiful riding, is dramatic play, where the story, plot and re-told the story...

The necessary information about the play "Alice in Wonderland":

1. Children up to 3 years pass under one ticket with the adult, without the right to occupy a seat.
2. The ticket is valid for the session specified on the ticket.
3. Parking for personal vehicles of spectators at the multi-level Parking - PAID.
4. The entrance to the Ice Palace begins approximately 45 minutes before the start of the session specified on the ticket.
5. The trademark Kinder® for many years and is a reliable partner of the project, and each year gives the audience a unique Christmas tale, the atmosphere of holiday, joy and fun. Your child is waiting for a gift from Santa Claus? Kinder® has prepared a brilliant, delicious and fabulous Christmas gifts for all children up to 14 years old present at the event.
6. A coupon for a FREE gift from the Kinder® given to children at the entrance to the Ice Palace after passing the ticket control.