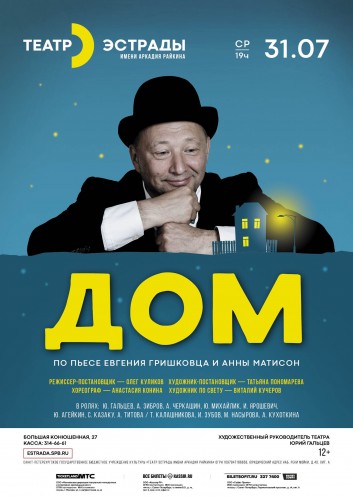 On 31 July and 1 August at 19:00 at Variety Theatre. Raikin – the play "House" on the play of one of the most famous contemporary Russian playwright Yevgeny Grishkovets. The main character plays Igor is a doctor, working in an ordinary district hospital. He has a favorite work, family, and loyal friends. You only realize the unseen, childhood, dream to build own house. Following this decision, events push the hero difficulty, which will make him completely rethink his life...

"This is the first performance of "Home" outside of Moscow, - says Evgeniy Grishkovets. - The main role – the art Director of Variety Theatre, Honored artist of Russia Yuri Galtsev. I knew he had long wanted to put this play and to play it to play a major dramatic role. Was very unexpected for me show. Unexpected in the sense that I could not expect ever to see the performance of any of my plays with lots of songs and even dances. And to see that neither the songs nor dances do not destroy, do not destroy the very drama. And, of course, you will see on the stage, the artist did not know before that in similar roles, I highly recommend you".
'tseva for such a complex dramatic role was an attempt to step beyond the usual way and the show will only benefit from this. The show has an unusual synthesis of music and drama, it is filled with songs, dances and elements of theatrical clowning. It was highly praised by theatre critics and visited by the Prime Grishkovets believes that it was absolutely the performance of the Variety Theatre finally gained a real (and the first in its history!) a private St. Petersburg home.
Starring: Yuri Galtsev, Andrei Zibrov, Alexander Cherkashin, A. Janko, Igor Yaroshevich, Yury Again, Stanislav Kazak, Anna Titova, Ilya Zubov, Tatyana Kalashnikova, Maria Nasyrova, Alain Mahotkina
Artistic Director – Tatiana Ponomareva. Lighting designer – Vitaly Kucherov. Choreographer: Anastasia Horse. Director — Oleg Kulikov.
Category: 12+. Duration: 1 hour 40 minutes without intermission. Beginning at 19.00.