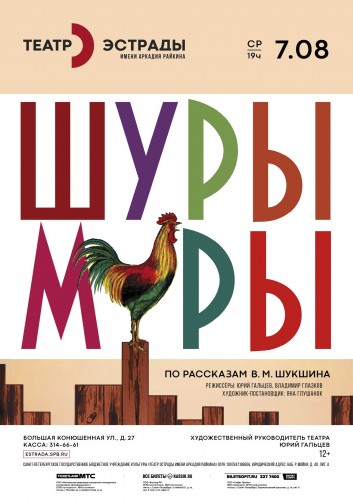 7 August on the stage of the Theatre – play "hanky-panky", the stories of Vasily Shukshin, who on 25 July, would have turned 90 years old!The famous actor, Director and writer born July 25, in the Altay village Joints in a peasant family. When he was 25 years old, he enrolled in VGIK on Director. After the first movie "Two Fedor", where Shukshin played a major role, it was clear that in the Soviet cinema there is a new brightest star. Removed them on his own script "Lives a guy", in 1964, was awarded the "lion of St. Mark" at the Venice film festival for best film for children. Then there was the "Pechki-Lavochki", "Kalina Krasnaya"... the Last year of living Vasyl Kravchuk was working on a novel, "I came to give you freedom" about Stenka Razin, starred with Sergey Bondarchuk in the film "They fought for the Motherland" on the set where suddenly 2 Oct 1974 died suddenly from a myocardial infarction. "When there are such people, is our happiness. We have to live with the feeling that there is someone to turn into a" - post of the lion Anninsky.

Staged by Yuri Galtsev and Vladimir Glazkov performance based on the heartwarming stories about ordinary people. The main roles in the play performed by young actors and Actresses, graduates galewski workshop, because the creators of the statement sought to look at the Shukshin prose through the eyes of a young man, our contemporary, and to understand that close to him in these little masterpieces of Russian literature of the last century. "Hanky-panky" is a series of miniatures, this is a vivid mosaic of short stories, funny and sad, funny and lyrical, telling about the life of Shukshin "geezer". Lydia Fedoseyev-Shukshin, who visited the Prime Minister was ecstatic!
In performance are occupied: A. kastrica, A. Kipin, A. Kokotkin, A. Lazo, M. Nasyrov, A. Pavlyukova, A. Sevastova, A. Tkachenko, A. Hypponen, I. Arkhipov, K. Galstyan, K. Petrov, A. Shilnikov, A. Spungin, A. Yanko, D. Mamonov Dmitry ENIN, Y. mikhaylik, I. Yaroshevich.
Production designer – Y. Glushanok. Choreographer – I. Lyakhovskiy. Music Director – A. Eranov. Lighting designer – Vladimir Kucherov.
Beginning at 19.00. 12+. Duration: 3 hours with one intermission.