Hello, I your aunt! 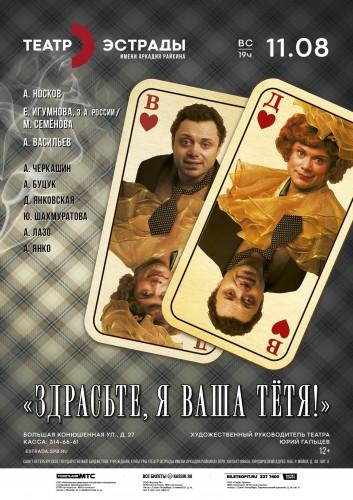 11 Aug the Variety Theatre. Raikin presents the play "Hello, I your aunt!". Actor Andrey Noskov set and played a major role in a light Comedy story of an unemployed adventurer Babs of Moberley, by chance forced to "transform" into a charming Brazilian aunty-millionaire, well known to every spectator in the film "Hello, I your aunt!" with Alexander Kalyagin in a leading role. Few people know that this production has a long and successful theatrical fate. Written in the late nineteenth century by the English playwright Brandon Thomas ' play "Charley's Aunt" was first staged at London's Royal theatre in 1892. A few years with an incredible sold out the play was on Broadway. Andrei Noskov, speaking as the Director of the play, and as a leading actor, was a very difficult task... But, judging by the full houses at each performance, and genuine laughter in the audience, he did it...