"Kukota&amp;Chekhov". "Hysteria" on October 7 in Saint-Petersburg 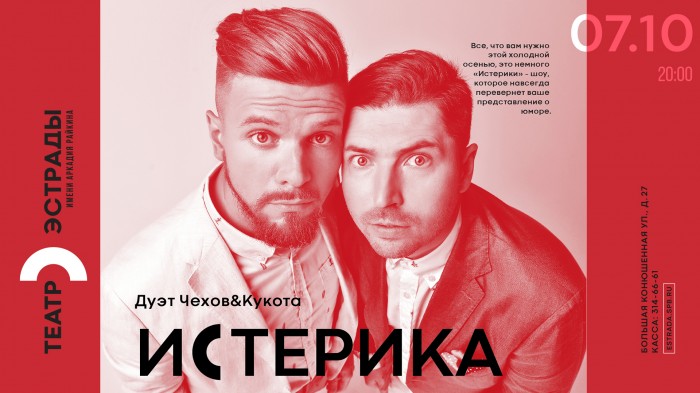 October 7 in the Variety Theatre. Raikin Comedy Duo "Kukota&Chekhov" will show viewers the real "Hysteria" - a new concert performance, consisting of the best Comedy rooms and Comedy sketches. These guys don't need any introduction, they are one of the most promising young duos in the Comedy world. Their creative journey began with participation in such projects of the channel TNT, such as: "Comedy Club", including performances in the Czech Republic, Germany and Israel, "Laughter without rules" "Lethal League" and "Comedy battle", "Point u" and "don't sleep". The children took part in a popular entertainment parody the transmission on the First channel "the Big difference", and one of the highlights of their career was a performance at the Edinburgh Fringe Festival - the world's largest arts festival.

Duet "Kukota&Chekhov" is one of the most eccentric tandems modern domestic Comedy. Michael and Igor play in plays ("All-Shakespeare", MIME show, "Quiet", etc.), perform at major festivals, participate in popular TV shows, remove shows on YouTube and even rap...
The main feature of the Duo – plastic sketches, pantomime, clowning, miniatures, built on non-standard sounds, simulations and grimaces – it's what comedians are the real enthusiasts and masters. Concert "Hysteria" performed by Kukota and Chekhov is the time "comic book" of all your favorite favourite numbers, it's a real splash of comic hysteria, filed in short speeches.
All you need in this cold autumn, it is a little "Hysteria" – a show that will forever change your idea of humor.