Fair 25 and 26 October in Saint-Petersburg 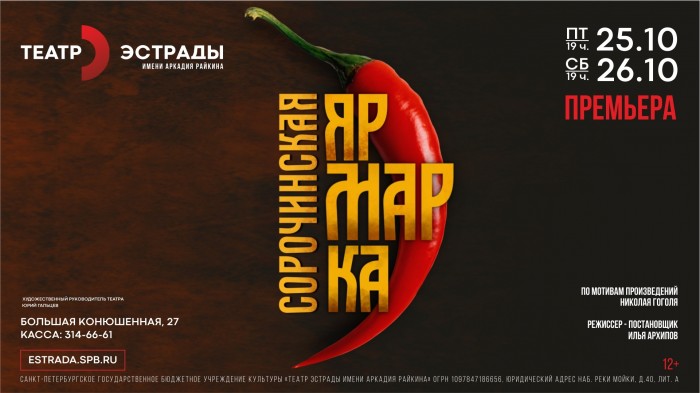 Variety theatre opens anniversary season with a premiere on Gogol

On October 25 and 26 in the Variety Theatre. Raikin will present its first premiere of the jubilee of the 80th theater season, the performance "Sorochinskaya fair" directed by actor and Director Ilya Arkhipov.

"You must have heard somewhere discarded a distant waterfall, when alarmed a neighborhood full of buzz and chaos of uncertain sounds wonderful whirlwind rushes in front of you. Isn't it, not those most feelings instantly take you in a whirlwind of fairs, when all the people fused into one huge monster and moving all your torso in the square and on the narrow streets, shouting, he cackles, rattles?" -

N. Gogol. "Evenings on a farm near Dikanka".

The events of this incredible story, based on the works of Nikolai Gogol occur in summer Sunny day in the Ukraine. Magic and mystical scene, revived the tradition and the unpredictable oddities – that's what awaits you in this musical extravaganza. But to connect the hearts of lovers will be able those from whom assistance is expected in the last turn. Folk tunes supports modern author's music, and the sincere enthusiasm of the actors gives this story an indescribable charm.

The new production of Variety Theatre. Raikin will present a young but already fairly well-known actor and Director Ilya Arkhipov, brought here to this incredible children's production of "the dark knight", "the Magic ring" and "Rikki-Tikki-Tavi"which enjoys huge popularity among children and adults. Fans of the theater a long time swear by him, in his acting of the role with equal success, Elijah is reincarnated in doctor Dolittle, the Michael-Olivia in the "Show for real lady", always invoking the audience's delight and an indispensable adoration.

"I decided that we needed to offer something extraordinary. "Sorochinskaya fair" is the most atypical work of Gogol, to which we are accustomed - hoaxer, cold, chilly shivers," says Ilya. – In the new play connected motifs, characters, fragments of several works of the writer. We create a whole world around this fair, where we connect "Via", "Missing letter", "How quarreled Ivan Ivanovich with Ivan Nikiforovich" and even "Drowned". It will be a real fairground carousel that will spin the story and weave the fate of the characters, weaving them into different stories – mysterious and intriguing". The performance will be the biggest staging of theater – only stage will involve about 30 artists and musicians".