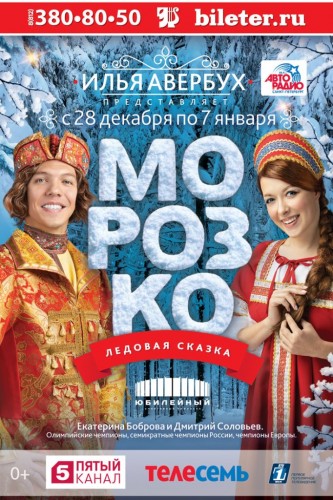 From December 28 to January 7 in the SK "Jubilee" will be held new year's performances of the wizard of the main Russian producer Ilya Averbuch. The tale "Morozko", which many love since childhood, in Saint-Petersburg will show 26 times. Starring Olympic Champions Sochi: Ekaterina Bobrova and Dmitri Soloviev.

Audiences can expect a magical story about the forest man, the sorcerer Jack frost. Classic story with modern special effects and colorful scenery, and the characters will have time to visit a far away Kingdom, in the enchanted forest and the hut of Baba-Yaga, you will see a real flight of the Firebird and I lit a fire right on the ice.

"Christmas performances on ice - a real winter holiday for our team and for spectators who come to the show with the whole family. The tale "Morozko" - one of the most beloved stories in Russian folklore, she reminds us of eternal values - kindness, sensitivity, and justice. I am sure that "frost" will appeal to young and adult residents of St. Petersburg!" - says Ilya Averbukh.

Ice show "Morozko" will be held in the Northern capital on the eve and during the winter holidays and will be a great gift for all lovers of fairy tales and Christmas miracles.