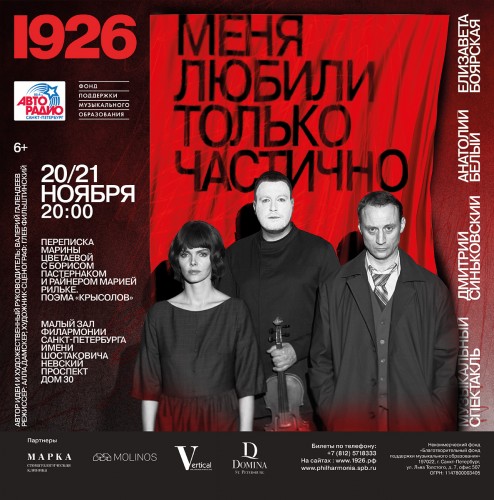 The story of the acclaimed play "1926" were the relations of Marina Tsvetaeva and Boris Pasternak, as well as fragments of the poem "the pied Piper". Elizaveta Boyarskaya and Anatoly Bely bring on stage the vicissitudes of Platonic one of the greatest novels of the twentieth century. The third character of the drama Rainer Maria Rilke - his voice is given to violin virtuoso and countertenor Dmitry Sinkovsky.

The Petersburg spectators will again be able to see this multimedia show, which first achieved dramatic incarnation of the texts of the letters of the two poets. The correspondence, which began in mutual admiration of one poet, the other, very soon turned into a real passion. In the scalding dialogue Tsvetaeva and Pasternak, hundreds, sent each other letters, the sensuous is inseparable from the creative. These texts - real poetry, script, metaphors, intellectual pleasure. Playwright and Director Alla Damsker wove from thin epistolary canvas real letters dramaturgy of the play "1926". Two geniuses fourteen years of talking to each other letters, the whole prism of human emotions and experiences in this correspondence, and it is impossible to pass without music. The sound of a live instrument is becoming one of the most important meanings, reveals psychological subtext of what is happening.

In the magical space of play 3D-projection-video mapping combined with the timbre of the instrument. At the same time the violin becomes the voice of the invisible presence of the German poet Rainer Maria Rilke. Person close, consonant important - and for Tsvetaeva, and Pasternak, they believed his heart to poetry, he died in the last days of 1926. Their letters to him is an important part of the play, deepening the optics of this drama.

The selection of a musical score is a separate line of the play, prepared by the composer Alexey Kurbatov, includes his own works, as well as complex the first part of the Bartok sonatas, masterpieces of Bach, ysaÿe, Berg, Penderecki, Shostakovich, Piazzolla and others.
Invisible thread connected the two greatest poets that are posted "at two different ends of the earth." Their correspondence, then faded, then flared up again, gaining a new level of intensity. During this time, changed their lives, changed of the era - and all the dreams and attempts on the meeting ended in failure. Is a multimedia, music and dramatic story of love and death told by one of the best artists of the two capitals.

The author of the idea and the project's artistic Director - Valery Galendeev, artist-designer Gleb Filshtinsky, costume designer Alina Herman. The show was created by the Foundation to support music education the producers of the play "the Unknown friend" with the participation of Polina Osetinskaya and Ksenia Rappoport, and the International violin festival Violinfest, project "Yellow stars".