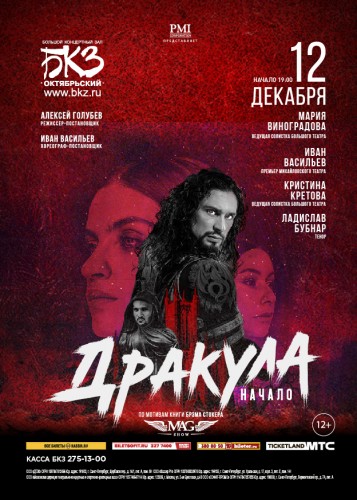 The Corporation PMI, Director Alexey Golubev (MAG FILM & SHOW) and choreographer Ivan Vasiliev (the Prime Minister of the Mikhailovsky theatre) present the world premiere of the ballet based on the bestselling Bram Stoker's "Dracula."

Vlad Dracula - the most famous and powerful vampire, created by writer Bram Stoker is on the verge of fiction and facts based on the real historical character of Vlad Tepes, ruler of Wallachia. Lost love due to treachery, he agrees to avenge her cooperation with the dark forces. Bestseller Stoker is included in the "100 best detective novels of all time" and was translated into many languages. The Gothic novel was repeatedly staged as a drama, musical, ice show, became the basis of cult films. But for the first time in Russia the story of Dracula is told in a new genre, born at the junction of several.

Alexey Golubev and Ivan Vasiliev present the world premiere of "Dracula. Start": here, the theatre mingled with the cinema, musical - classical ballet. The latest technology will serve the actor's talent and skill, more movie-insert complement scenographic reality, light, music and scenery fully immerse the viewer in the events of bygone days. Elements of immersively, unique stunts, live music and a total of more than 200 people working on the production.

Ivan Vasiliev, honored artist of Russia, will dance in the ballet the title role, and will share the stage with leading soloists of the Bolshoi theatre Kristina Krutovoy and Maria Vinogradova. One of the main vocals will perform Vladislavovna, laureate of international competitions and finalist show "Voice".

On stage at the same time will be 50 artists of different genres. Battle scenes, breathtaking scale and detail, 3D-projection carrying all present, from one century to another, from the castle on the field of battle, from light to darkness in a moment, more costumes artist Galina Filatova: bright, stylish and attractive - all this adds texture and images of the characters and enhances the emotions of the audience from what is happening.

An amazing story of love, betrayal and revenge, struggle, hatred and forgiveness will conquer the stage of BKZ "October" 12 Dec 2019.