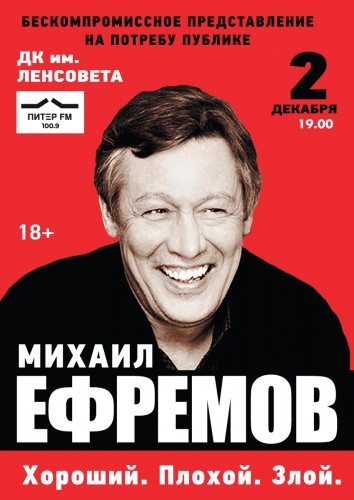 2 Dec Favorite artist of Russia Mikhail Olegovich Yefremov will perform at DK Lensoveta with "the Good, the bad and the ugly", called uncompromising performance for public consumption. In two hours you can learn about thorny creative path of the artist, listen to Frank gossip about parents, friends, teachers, wives, children, friends, companions, enemies, and politicians, and myself. In addition, Yefremov promises (unless, of course, not lying) to honestly answer the most Frank questions from the audience.Three sources, three components of Mikhail Efremov as we know it, look, love and hate. Mikhail Yefremov is more than 110 roles in movies, 20 roles in the theater, more than 10 theatrical projects as a Director. Hundreds of publications and TV spots frankly scandalous, philosophical, artistic, domestic, political, civil and uncivil content.

All that talk about Michael Ephraim, often diametrically opposed. He is good and bad. He hates the media and his controversial reputation, but he also led a deeply heart-wrenching "Wait for me" on TV. Himself says, and this phrase is quoted that he is a buffoon, but rather he – the minion of fortune, intellektualnyy actor and deeply feeling man. Man of the theatre. In their speeches, Efremov affects various aspects of life: from politics to arts, from everyday life to philosophy. His constantly sarcastic and often controversial manner of filing cannot be confused with someone else."Only theater. I grew up backstage at the Opera and I was constantly driven. Grandfather Boris Pokrovsky was the Director of the Bolshoi theatre. Theatre has always been present in my life. Behind me, dozens of plays, and one Opera. I managed the theatre. But I left there, because to me there is not enough space, - says Mikhail Olegovich. - I'm a rebel. For me the most important is the freedom, but I'm tied hand and foot with name. I'm a Scorpio by horoscope, so sting himself. Very secretive and open at the same time. I'm a polar person like the Earth." For two hours the audience is held by Michael his entire career and life. Illustrated poetry: from reading the first in his life, the contest of Amateur performances to the latest numbers. Decorated with fragments of films: from 14-year-old Kopeikin from "When I'm a giant" 19-year-old Dubrovsky from the same series up to the most notorious drunks and cops. Diluted revealing gossip about yourself, parents, friends, teachers, wives, children, friends, companions, enemies, and politicians. In addition, Michael O. shall, if not lying, honestly answer questions from the audience.
"The one-man show called the promoters "session for mental Striptease", Mikhail Efremov licemeister and changing the images every two hours. There will be childhood memories, and excerpts from theatrical roles, poetry Rilke, Pushkin, Mayakovsky, Shpalikov, limericks, fables and songs of the Soviet time. And yet — the most acute and topical numbers from the programs "Citizen poet" and "Mister" with poem by Dmitry Bykov, Vasya Oblomov and Oluchi" - poster