Quartet: Conversations of men of middle age on women, cinema and aluminium plugs 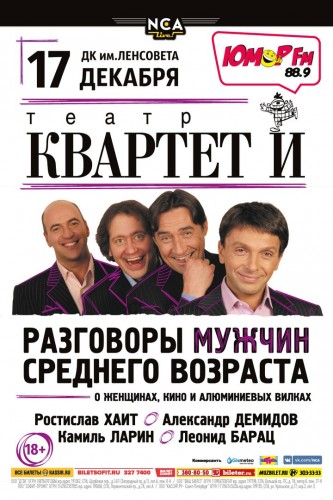 Date:
17.12.2017 19:00
Venue:
Palace of culture named after Lensovet, PR-t Kamennoostrovskiy, 42, Saint Petersburg
A visa is required:
for Russian citizens is not required

17 Dec theatre "the Quartet And" returns to the Northern capital, to delight of Petersburgers long-awaited production of one of his best performances – "Conversations of men of middle age on women, cinema and aluminium plugs".

Rostislav Khait, Alexander Demidov, Kamil Larin, Leonid Baratz.. Four middle-aged men talking on stage about exactly what interests them and what they really think. About relations with women, unsatisfied ambition of a Hollywood movie, about cheating, that's just what (feels like) ended childhood, about Paphos, about getting old.
"The history of this production began simultaneously with the play "Faster than rabbits"... and if it does exactly what even a little early. When we had only just begun the "Rabbits...", just trying to find some starting point from which to start writing new pieces, we talked. Talking about things you care about middle-aged men (and that was us then for 35-38 years)," – share the history of the show participants "the Quartet And".

Hall is sitting with bated breath, afraid to miss a word. It seems that everyone in the audience has something to add to this endless series of stories on mutual male and female meanness, "curve the female logic" and hypocrisy in life and in art.

And yet, on another immature tradition of the "Quartet", in the play a lot of video. Or rather – the movie. The feeling of the transience of life, and that everything's going to end, leads to the appearance in that show five fragments from five completely different movies. Such an attempt to cheat fate is to take the best, climactic scenes from films that were never be lifted.

Accurate observations, unexpected twists trite and banal topics, brilliant beat and the absurdities of standard situations. Love, betrayal, male and female, meanness, contemporary theatre, film, art – all this and more is the subject of "Conversations...", the play, which is not to be missed! We are waiting for you on 17 December in DK. Of the Leningrad city Council.

The details in the VC: https://vk.com/kvartetispb