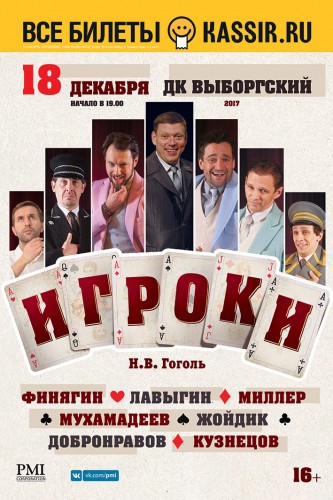 Date:
18.12.2017 18:00
Venue:
Saint-Petersburg, DK Vyborg street of Commissioner Smirnova, 15
A visa is required:
For citizens of Russia is required

Corporation PMI company and the Theatre "Free stage" are

18 December on the stage of the Palace of culture "Vyborg" performance "Players" on the play by Nikolai Gogol.

At the heart of performance "Players" the immortal Nikolai Gogol's Comedy - a charming story of card cheats, a masterful point guard not only the card party, but also represents a psychological battle rogues, filigree obygryvaya his victim! Great hoaxer, the master of psychological and shower Gogol gave us not only at first glance a brilliant Comedy, but a wise warning against walking along the edge of the abyss....And this balancing on the verge of morality with acute "sharpened" story makes this work more relevant than ever!

Director Thank tyschuk wittily tells the audience deciphered the interpretation of the play. A story in which not only the characters are interesting, charismatic and Gogol's ridiculous. But the circumstances in the new version of the play will be escalated to the limit: it's a dangerous play, cheating, or falling under the influence each other. In this story, at first glance, no main characters, the entire company - in power GAMES, but it is the people themselves, the motives of and reasons for their passions more interesting.