"Puss in boots" on the stage of the Congress center. Plekhanova 1 Feb 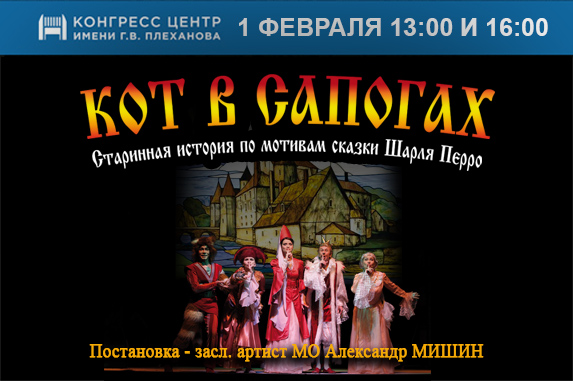 On 1 February the Moscow Regional theater of drama and Comedy invites children and their parents in the Congress center.Plekhanov on the play based on the tale by Charles Perrault "puss in boots".

Company "New Russian Classic" and the Moscow Regional theater of drama and Comedy begins the season 2020 cycle of performances for children. February 1 in the hall of the Congress center.Plekhanova you can see bright and exciting musical performance of "puss in boots", February 2 – story of the brave mongoose "Rikki-Tikki-Tavi", and 29 February – the musical "birthday of Leopold the Cat".

A great opportunity for adults to spend time with their children and once in a while to tear them away from computer games and TV, and at the same time to introduce kids to classic children's literature! Who knows, maybe many years later this day your children will remember as the happiest in his childhood!