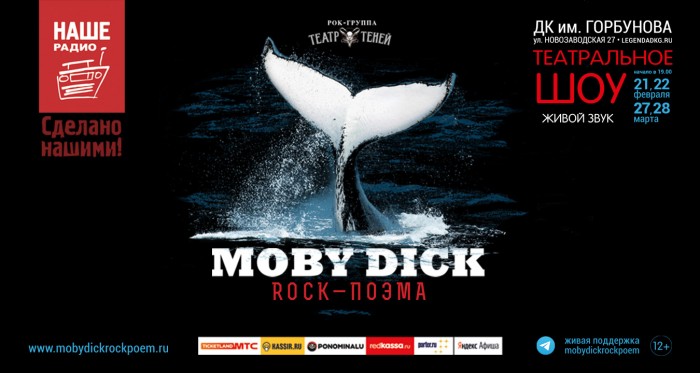 On 21 and 22 February, 27 and 28 March 2020 viewers DK im. Gorbunova waiting for a big theatrical-musical show – rock-poem "Moby dick," the project is unique and absolutely unprecedented for the Russian stage.

Hardly in the whole world literature can be found more challenging for the production work than a novel of Herman Melville – the tragic story of captain Ahab, mad with lust for revenge, a huge white whale assassin named Moby dick.

Nevertheless, there was a hardy man, swinging to the classics of American literature. They were an independent producer company "Theatrical business" and rock band "Theatre of shadows", who translated the deep philosophical and religious meaning, full of symbolism the novel is universal and understood by all the language of music.

Music, dance, scenery, visuals and special effects create a multi-layered composition show a kind of "clip", which literally mounts on the front of the public. And at the end of the play huge multimedia ocean covers the auditorium. And, despite the tragic ending, the final final ballad sounds a real hymn to Life.

Behind the creators of "Moby dick" is already a high-profile project – the rock musical "Todd" with the band "King and Jester", who has several years with the same success at the best venues of Moscow and St. Petersburg. Managed to become a cult musical has proved a big demand so unexpected, at first glance, the combination of rock music and drama theatre.