Performance "the Master and Margarita" 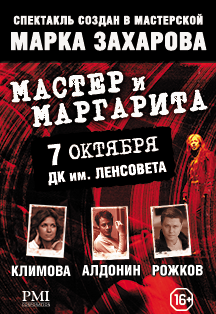 Legendary play based on the novel "the Master and Margarita", created in the workshop of Mark Zakharov (GITIS) the Director-Director Sergey Aldonina, after 50 successful shows in the Theatre and at various festivals in Moscow, was included in the permanent repertoire of Theatre of a name of Stanislavsky, and later became one of the most brilliant performances in the repertoire of the Theatre M. A. Bulgakov.

The action of the play is built on the principle of synthesis of theatre art and the elements of the show: mad tempo-rhythm, alternating scenes by the principle of imaging, vivid visual form, original screenplay. The auditorium and stage are transformed into a mystical space where the viewer does not know where to appear and disappear where heroes. Tragicomic fantasy Director envelops the viewer from all sides, and the characters, as if just descended from the pages, forced to survive the mysterious events of the great novel.

Sergey Aldonin included in the dramatization of excerpts from drafts of Mikhail Bulgakov, which, in his opinion, allows to emphasize the main themes that have preoccupied the author. In the production of a lot of music, pantomimes and tricks, and everything else that is usually called "theatre Mark Zakharov".