The play "Chapaev and Emptiness", the main role played by Mikhail Efremov 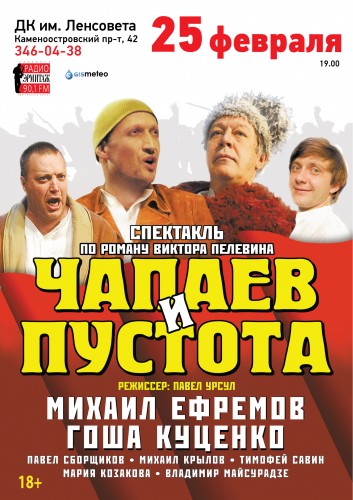 In the play based on the cult novel by Viktor Pelevin will play Mikhail Efremov, Gosha Kutsenko

February 25 at DK Lensoveta – performance "Chapaev and Emptiness", the main role played by Mikhail Efremov. And again, for the second time in many years the existence of the play, the role of the Kotovsky will play Gosha Kutsenko.

"Chapaev and Emptiness" - one of the most successful and innovative performances on the contemporary Russian stage. Unusual literary material, a bold Director and starry cast for the past 15 years enjoyed great success among the public. Unpredictable Mikhail Efremov in the role of Chapaev, virtuoso Mikhail Krylov, Pyotr Void, a charismatic Gosha Kutsenko – Kotovsk, young and talented Maria Kozakova and Ekaterina Smirnova in the role Anki-gunner and brutal, handsome Paul Collectors – Serdyuk. No doubt this is the case when the sum of all the summands more than each actor individually.

To put the performance in Pelevin is not just a challenge. After all, to embody an action that "takes place in an absolute vacuum" - not an easy task. But the creative trio – Eugene Sidikhin, Aleksandr Naumov and Director Paul Ursul - masterfully gave his vision of the acclaimed novel, because the production is clear even to those who have not read the book. And judging by the longevity of the play, it was a success!

"For me, Chapaev is, first and foremost, Boris Babochkin, he gave the country the image of this hero. And thanks to Victor O. for what he described him not as a person alive, but as a myth, - says Mikhail Efremov. - About "Chapaev and Emptiness"? About duality, about that Olesha wrote, he had such heroes-twins — and then years later they began to introduce in their stories Pelevin. He is wildly beautiful words and images, here is a great sentence: "Better to be a clown the fag than the fag clown". It's worth it, it's really our time completely determines".

The viewer is caught between two worlds, one of which is the division commander Vasily Ivanovich Chapaev and his squire Petka trying to understand the feasibility of what is happening in the universe, and in another patient in a psychiatric institution is in the world of surreal dreams. In an incredible game included and other "crazies": a bearded man introduces himself Just Mary and goes on a date with Arnold Schwarzenegger, and a group of cases headed by Kotovsky "eats mushrooms in search of the eternal buzz".

Despite the apparent recklessness of the plot, "Chapaev and Emptiness" - a play philosophical, piercing, sad and incredibly funny and modern. Stars of theatre and cinema Michael Efremov and others involved in the staging of the actors, it is possible to delicately combine all of the eras in which events are unfolding - civil war, the modern psychiatric hospital, and the great Void, which, finally, the heroes go...

"The play at the most famous book of Victor Pelevin "Chapaev and Emptiness" goes to the Russian stage for more than six years. In one plane of the performance of the famous red army Vasily Ivanovich Chapaev and his squire Peter Emptiness trying to understand the feasibility of of everything in another (and depicted much more convincing) is the main character actually lies in a mental hospital. Crossing over these two universes, Pelevin dilutes the text numerous allusions and philosophical speculation. About how to relate to the fact that in the formulation of metaphysics gives way to slapstick, disputes among the theater not subside until now" - "bill"

The author of the novel – Victor Pelevin, Director Paul Ursul.

The event in social networks: