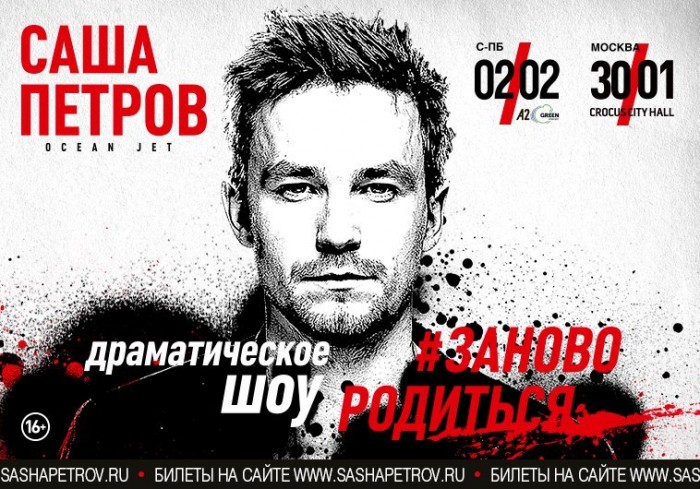 Sasha Petrov shows his dramatic show #SANAFONTIS at thousands of sites in Moscow and St. Petersburg. On January 30 he will perform in "Crocus city Hall", and February 2 – in the club "A2".

"The first thought that I had a year ago when premiere #SANAFONTISis you have to play in stadiums, large venues, - says Alexander Petrov. - The more people the better the atmosphere."

As an actor Sasha Petrova know the main role in the blockbuster movie "Gravity", the movie "Goldeneye", the TV series "Police Rublyovka", "Method" and others. A year ago, he revealed other facets of his talent. Petrov has created a completely independent project – copyright statement #SANAFONTISin which he and the screenwriter, the Director and the only actor.

The plot of the play took shape one evening. But it was preceded by poems that Sasha wrote literally everywhere, but most often in airplanes, and dedicated them to the actress Irina Starshenbaum — his Muse.

... The night was —
and you haven't slept...
In fact, you immediately understand:
you're in love —
and immediately a light lit up:
you're BORN AGAIN!

Form #SANAFONTIS is a solo performance, with innovative decorations made directly to the auditorium. But at the same time – a concert, where in the foreground the atmospheric music of Ocean Jet.

For hero Petrov never should the live camera broadcasting every step of the actor on the giant screens, so the audience has the feeling that they are present in the film. A series of specially made short films it brings to the cinema.

#SANAFONTIS is a completely new genre of performance art that combined cinema, theatre and music.

Show #SANAFONTIS – every time it is improvisation, but with a clear structure, the monologues of the hero be more emotional or funny, concise or, on the contrary, lengthy. The show has proven its versatility in Moscow, St.-Petersburg, Voronezh and Ekaterinburg. And one of the most extreme performances took place under the open sky at the temperature of +9C at a music festival.

Later, slightly changing the creative architecture, the show has found a home within the walls of a classic theater – theater. M. N. Yermolova.

Rod productions – poetry. For Petrov's poetic expression is a mission. Poems are not only on the stage. In January will go on sale the first book by Sasha Petrova with more than twenty poems, revealing interview about the origin of #SANAFONTIS. In creating the collection was attended by all the team drama of the show, each told the story of the draft in his life, including and actress Irina Starshenbaum.
"He does everything with such confidence, and he really does make it look easy. – admires the Ira. – He is a talented person living with a love for people. It's a win-win, because he does everything for people. It touches".

An integral part of the performance is the music of the band, Ocean Jet, misleading the audience into a trance. Key track performances "Breaking the Stones" – the person to overcome any difficulties. He goes to his goal, not paying attention to people who tell him that nothing will happen. He believes in himself, willing to take risks, to make mistakes and go your own way, not looking back. Lives hero Sasha Petrova in the show #SANAFONTIS.

"Ocean Jet is such a stylish English electronic indie rock. When you listen to guys will never guess what they are doing and live in the city Kostroma. – says Petrov. – Their music reminds me of the time when Ira and I started Dating. They became the soundtrack of our relationship. And they are also the musical heart #SANAFONTIS".

Sasha Petrov literally bare your soul and tell pervades the story of a love triangle, his earnest monologues, like confession, will fill the space, and read on break your own poetry will make the audience re-look at their relationship.