The national dance shows the Legend of Georgia. Georgian Legend 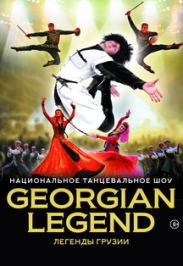 The show "Legends of Georgia" by the universal recognition of the world press exceeds the scope and drama of the leaders of the genre – the modern ballet show "Riverdance" and "Lord of the Dance", became one of the most successful music and dance spectacles in the world, implemented using cutting-edge technologies to produce a super show.The show "Legends of Georgia" talks about Georgia: its history, its legends and its people, the love of Georgians to the Homeland, courage and goodness, of military victories and the love and respect for the woman...

The basis of the new Show lies Georgian legend, when God distributed the peoples of the earth, the Georgians were sitting at the table, sang, danced, drank and had fun. And when they finally came to the Lord, he has no more lands. Then the Georgians had invited him to your table, and the Lord had such a good time that, without hesitation, gave the Georgians the land that is in store for yourself.

A masterful interweaving of stories from the history of Georgia and Caucasus, ably embodied in a delightful dance, music and songs, complemented by stunning costumes, scenery, fantastic light and the best sound, turn the "Legends of Georgia" the triumph of the Caucasian culture on the world stage.

The Georgian dance is unsurpassed. The movements and posture of the dancing Georgian, as he held, could be judged, to marry his daughter or not. Dance on your toes, spinning on the knees is a great art. And women... You saw how they slide across the stage like swans on the water surface? "To dance Georgian dances, must be born a Georgian," explain the dancers.

Concert "Legends of Georgia" – is an unforgettable experience, a real miracle! No wonder the French newspaper Le Figaro wrote about the Show: "... It is a sight that everyone should see at least once in your life!" The show is full of love for Georgia, where all – even a gust of wind, the beat of drums and bells, the majestic silence of the mountains and the joyful murmur of the mountain streams – all associated with music, song and dance!

According to correspondents of the newspaper the New York Post: "Every concert the show "Legends of Georgia" is a real feast for the eyes and ears of the audience." Georgian artists were applauded by the audience of more than 50 countries on 5 continents, the artists of the Show performed in the most prestigious and unique venues around the world, presented their art to the kings and heads of state, in the far North and in the desert at the Pyramids, the wild American West and in the East – in China. And they are proud of the fact that each Show ends with a tumultuous standing ovation by the grateful audience give to the Artists.