Gaetano TRIGGIANO - the Illusion of deception 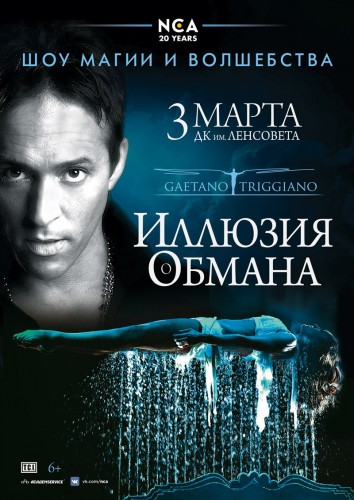 Date:
03.03.2018 19:00
Venue:
Saint-Petersburg, DK im. Lensoveta
A visa is required:
Of the Russian Federation (for citizens of Russia visa is not required)

Maestro of magic and sorcery Gaetano TRIGGIANO first performance in Saint-Petersburg with a new and incomparable show "the Illusion of Deception"!

With the Italian magician, many Russian spectators have got acquainted in the end of 2013, when TRIGIANO became the main hero of new year's performances "the Wizard of the country OZ" in Moscow. Then he revealed the real essence of magic, reviving his illusions fairyland. Gaetano delighted as the young and adults. And finally Maestro will visit the Northern capital!

Gaetano TRIGGIANO – Illusionist with a capital letter. It was his movie Studio Universal Pictures was involved with the acclaimed film "Illusion of Deception" with woody HARRELSON and Morgan FREEMAN. In addition, Maestro has received numerous awards including one of the most prestigious awards Mandrake d'or in the category "Best magic artist of the year". Since 2000, he is a frequent guest on television shows, conferences and theatres. His speech is remembered by the residents of more than twenty countries! Gaetano gladly accept in Europe and Asia, America and, of course, in Russia.

"The illusion of Deception" is a play with a gripping storyline. Every moment is a manifestation of a high level of skill. According to Gaetano: "the Magic is not in the hands of a magician, it is in the eye of the beholder". Therefore, every year the Maestro tries to surprise their audience – coming up with unique stunts, from which simply breathtaking!

This time Gaetano TRIGGIANO, which was filled with love for the Russian audience, preparing a lot of amazing and colorful room for your new show. Don't miss the opportunity to penetrate the veil of the mysterious world of "Illusion of Deception", where the line between skill and magic! We are waiting for you on March 3 in DK. Of the Leningrad city Council.