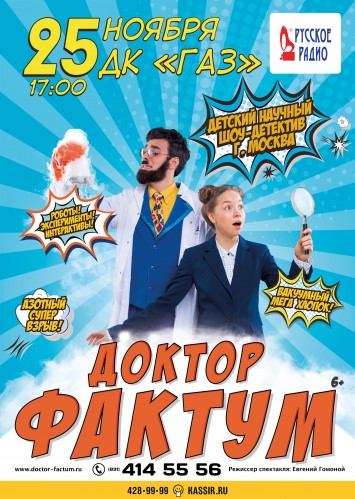 Scientific and entertainment project ArtТauka (Moscow) invites children and their parents to the premiere of children's performance - science shows detective "Dr. Factum", which were based on original story about a worldwide known scientist, the detective and the girl who, even against his will, he was not only assistant but a good friend.

The scene space is the secret laboratory of Dr. Factum where the audience take an active part in the events: together with the characters solve problems, do science experiments and go on a virtual tour.

Children learn how to work the electrical conductors and learn to extract the smoke from special guns. Before their eyes 200 liter steel barrel flattens, and the common shopping cart will be reactive! And of course, a large volley of nitrogen and hydrogen explosion! Instructive stories that happen to the main characters, will report on the main human values and serve the children help in the future!
Guests in the lobby will meet our actors - scientists and engage them in the Entertaining world of science. A variety of interactive zones will be a wonderful preparation for the main action in the auditorium.

In the play the actors:
Ksenia Danilova is an actress of the Moscow theater. Mikhail Bulgakov
Andrew shchetkin - actor of the Moscow Provincial theatre under the direction of Sergei Bezrukov.

At the end of 2016 the children's performance "the Doctor" Factum became the winner of the science festivals in Moscow, Abu Dhabi and Beijing.

The details in the VC: