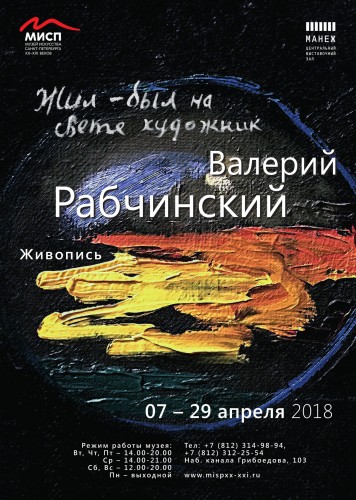 Date:
07.04.2018 12:00
Venue:
St. Petersburg, Griboyedov canal embankment, d. 103, art Museum of Saint-Petersburg of the XX-XXI centuries
A visa is required:
Of the Russian Federation (for citizens of Russia is required)

Museum of art of Saint Petersburg of the XX–XXI centuries is an exhibition of Valery Rybchinskogo (1945-2007) is known to the independent artist. On display at the iicp will show more than 60 works of art from different periods of creativity of the author, some of the paintings shown for the first time.
"There was a light on the artist..." is the title of the painting, written in 2005, Valery Rabchinsky. This little work is symbolic, it is full of deep meaning, feelings, reflections about creativity, about the purpose of the artist and his life. Rabchinsky died in 2007 in a few months he was 62. He was at the peak of his career, it seemed that there is still a lot of great pictures of implemented plans.
Valery Rabchinsky St. Petersburg, the artist, although in his work there are almost no known spectacular species of the Northern capital. He is not very fond of the landscape, preferring the closed world of the Studio, where he had access to only people close to him. His life was in the city with whom the author had a very complex, contradictory relationship. As a painter Rabchinsky could not help but admire the harmony and elegance of colors, the noble proportions and architectural ensembles, magnificent Neva. On the other hand, he felt oppressed by the low gray sky, the long harsh winter, although, of course, its flavor is largely built on the true Petersburg colours. A talented artist, like his hero van Gogh, he dreamed of sunshine, the colorful palette of the South. A boy of ten, Valery entered the school, and then at the picturesque faculty of the Institute of painting, sculpture and architecture. I. E. Repin. After graduation, he became a member of the Union of artists actively participated in exhibitions of his work attracted attention.
However Rabchinsky very quickly felt like a stranger in a rigid framework of existence within the Union of artists of the 1970s–1980s years. Not he found like-minded people and the community is rapidly gaining momentum in St. Petersburg "underground". Rabchinsky was a typical artist, a loner, preferring reclusive, immersed in the problems of creative life in the workshop dialogue, violent protests and assemblies of the Union of artists. More rarely, he participated in the official exhibitions of the Leningrad Union of artists. Only few understood his art and share his quest, appreciated and respected him for his independence of views.
Demanding of myself to the extreme, to ruthlessness, Valery was rarely satisfied with the results. Hence a painful and long way to complete the picture, which sometimes took years. Only a few of the works he created at once and more never touched them. This was evidence that he was satisfied with. Such works in recent times has become more and more. It seemed that finally the artist found what he was looking for in the art of life, and will now be able to afford a little rest. But life suddenly and tragically ended...