THE TRAGEDY OF A LITTLE GIRL 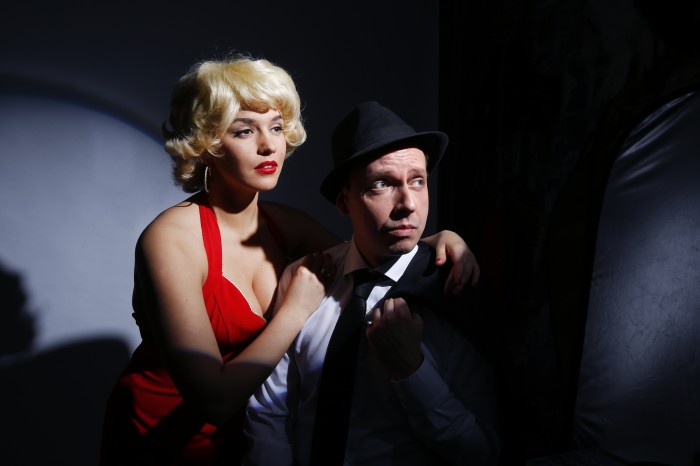 Even now it is unknown the cause of death of the great Marilyn Monroe, we offer to your attention only one of the versions. This performance, based on the memoirs, letters and diaries of Marilyn Monroe and the F. Sinatra's Valet George Jacobs.

The events take place a week before the death of Marilyn. The basis of the performance was songs of Frank Sinatra. You have the opportunity to relax, listen to live music and learn something you may not know about the relations of the great Marilyn Monroe and Frank Sinatra.

In it you will learn unknown facts from the life of the great Frank Sinatra and Marilyn Monroe, you will hear the hits of the stars in a live performance. You will find a wonderful journey in the USA in 1962, when people went crazy for jazz, going to the schools listen to your favorite artists, drink whiskey with ice to dissolve in the magical songs of Frank Sinatra and to see the living legend Marilyn Monroe.

Dmitry Noskov (Frank Sinatra), a famous movie composer, author of music for dozens of the most appreciable domestic films (Salyut — 7, Attraction, Love — carrot 1,2,3), Participant of festivals JAZZMAN 2018 (Saint Petersburg), VR JAZZ FEST (Moscow), etc. Graduate school StandUp Cimrman. Dmitry Noskov presented a concert program "I'll sing like Frank" along with a large jazz orchestra by Alexey Kruglov in October 2017. Specially for the concert were purchased by 17 genuine scores, and 4 more created by legendary Russian jazz musicians Yuri Markin, who personally attended the event and praised the quality of the material bands and, of course, vocalist Dmitry Noskov. So close to the original, both in appearance and at the hearing, the repertoire of Sinatra't played nobody, except Frank of course. Successfully performing in clubs and concert venues in Moscow (Jam Club Andrei Makarevich, Alexey Kozlov Club, etc.), St. Petersburg (48 chairs, White Night Music Club Joint, etc.)

Yanina Melekhov (Marilyn Monroe) — theater and film actress, choreographer, teacher, Honorary citizen of Russia, a member of the screen Actors Guild and the theatre Union of the Russian Federation. With a record of Ioannina over a dozen roles in theatre and cinema. It is recognizable in such films as "hipsters", "War", "Territory", "Hunters for diamonds" etc. the gift of acting, Janina was observed during the study in the Belarusian Academy of arts, where she received the special prize of the President of the Republic of Belarus for support of talented youth. And fully justifies it. Today, Ioannina plays in the Moscow theater "Expromt", successfully acted in films, works as a choreographer and Director and shares her experience and skill with the students.

The Serge Eksuzyan (piano) is a professional musician, the main pianist of the television program of the 1st Channel Valdis Pelsh "guess the melody", Winner of numerous jazz festivals since 1978.

DIRECTOR — Irina Yakubovskaya. He graduated from the Theater Institute. Schepkin(Director of drama theatre) and the Dnepropetrovsk state theatre school (the actress of the puppet theatre and drama), put 41 performance on professional and Amateur stage, the winner of 14 festivals as a Director, has played more than 40 roles in theater and film, participated in the creation of audio. The winner of the competition of playwrights.