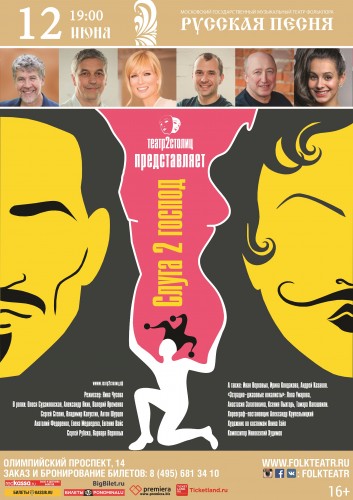 12 June 2018 the premiere of the play "the Servant of two masters" directed by Nina Chusova will announce its opening of a new theatrical project "Theatre of two Capitals". Premiere at the theater "Russian song"

"The servant of two masters" - a play known and loved around the world, and "Truffaldino from Bergamo" became almost a national hero. And every Director have found something new! Nina Chusova did a show about the pursuit of happiness!

Poor, but enterprising provincial Truffaldino enters the service to two masters, decided that two salaries are better than one. One he did not realize that the problems in his life, too, has doubled. Trying all ways to hide that works for two, Truffaldino gets into a series of awkward instances, so strongly confuses the whole story, twisting of fate that all are on the brink of disaster. Nobody, not even the servant did not realize that joined the service two lover looking for a friend

What: the premiere of "the Servant of two masters" and presentation of new theatrical project "Theatre of two Capitals"

At first our heroes, the representatives of different social strata, I think that each of them has their own concept of Happiness. For Truffaldino is a great opportunity to eat, Pantaloon — the enhancement of well-being. To Silvio — the ability to quench your anger, to Beatrice — the salvation of a loved one. But the way to become happy is the same. Everyone is willing to indulge in all serious: deceit, cunning.

The most honest in this company is the servant Truffaldino. By his actions, he not only restores harmony and gives everyone to understand that true happiness is not about money. It in love!

"The servant of two masters" directed by Nina Chusova is a brilliant cast, colorful Italian hits, and life-affirming Comedy that amuses and makes us think about what we need in life to appreciate the joy. A good mood, at times, allows to resolve the most difficult problems.

Put more than 20 performances in the capital's main theatres and abroad (ranging from Gogol to play "Mamapapasynsobaka"), collected a variety of awards for directing and even unexpectedly won the praise of Vladimir Putin, who came to see her production of "the Storm".

Since 2012 — artistic Director and chief Director of the Theater tale "aquamarine" in Moscow.

Performances by Nina Chusova has participated in International festivals in Munich, in Athens, at the International Shakespeare festival in Craiova (Romania), in the festival "Russian seasons" in Japan.

In 2018, was the guest Director at the theater project "Theatre of two Capitals"

"The theatre of two Capitals" is an ambitious cultural exchange project in Moscow and St. Petersburg. The place where the synthesis of music, vocal, choreography and the theatrical action. A Playground for creativity, where fresh directorial ideas, works of modern playwrights and the classics.

"The theatre of the two Capitals" combines tradition and "confrontation" of two theatre schools of Moscow and St. Petersburg. The theater has two equivalent sites in the two Capitals, and also organizes tours to other cities of Russia and abroad, not using the "simplified" version of the touring performances, and by showing in their originally conceived form. The viewer has the opportunity, without leaving their own city, to see a full-fledged theatrical production of the troupe, one of the Capitals made at the level of the best repertory theatres, which involved the most interesting performers and Directors.

"The theatre of two Capitals" is preaching the true, live communication between the artist and the spectator, in which there is spiritual interchange: crying, laughing, anxiety, a sense of unity. The application of virtual reality technology on the scene pushing the visible boundaries to infinity, surprising as theatre audience and attracting "generation of gadgets".