Ice the play "Romeo and Juliet" 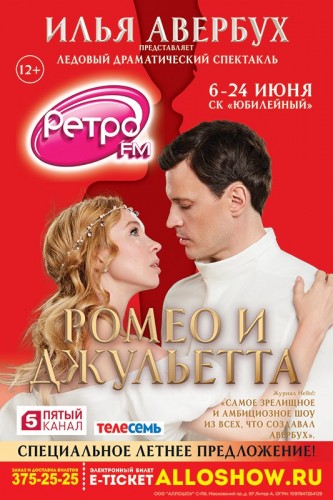 Petersburgers and guests of the city waiting for a tour of one of the most bright and colorful performances of Ilya Averbukh's!

The sale of tickets for the second season of the great ice shows of "Romeo and Juliet" was launched on 26 March.

Ice the play "Romeo and Juliet" was shown for the first time in Sochi in July 2017, and the year he was able to see more than 1 million people, thus becoming the most successful in the history of Russian ice show. The cast consists of 6 Olympic Champions Tatiana Totmianina and Maxim Marinin will play Romeo and Juliet, Alexei Yagudin and Roman Kostomarov (Marcuccio and Tybalt), Tatiana Volosozhar and Maxim Trankov (Prince and Princess of Verona). The project involved 22 athletes, coach class, 14 artists ice ballet, 5 singers, 10 dancers, 5 musicians. With skaters engaged in professional fencers, choreographers and acting coaches. The stunning beauty of the costumes created a whole team of artists - everything was sewn more than 160 costumes. As part of the creative and technical group of play works more than 150 people.

Ilya Averbukh: "For me the play "Romeo and Juliet" was a confirmation that we have reached a fundamentally new level in the production of the ice show. It really shows, sootvetstvuyushie the highest international standards. We managed to create a show that in its scope, bold visual and scenographic solutions is vastly superior to everything that was created earlier. We are excited to show our play in the largest Russian cities. Despite the fact that last year we only in Sochi have worked 4 months with daily notices, we are really looking forward to, and we expect this year to set an even greater record of attendance."

Ticket sales for the show "Romeo and Juliet" in St.-Petersburg and Sochi open from 26th March. Until April 30 there is a special summer offer - minus 15% on each ticket.

HELLO: "Romeo and Juliet" - the most spectacular and ambitious shows ever created Averbukh, stunning scenery and a number of stars of figure skating involved in the project."

WOMAN.EN: "Ilya Averbukh was a show, a work of art".

SOCIOINFORM: "Averbukh took another big step forward. If "Carmen" seemed a tremendous achievement after the "big city Lights", "Romeo and Juliet" and left it far behind."

VACATION WITH CHILDREN: "the Production of Ilya Averbukh's "Romeo and Juliet" is the embodiment of the very best high quality, that can be shown on the ice. How brilliant Shakespeare, so he played his tragedy in this show."