The show "How it was done in Odessa" 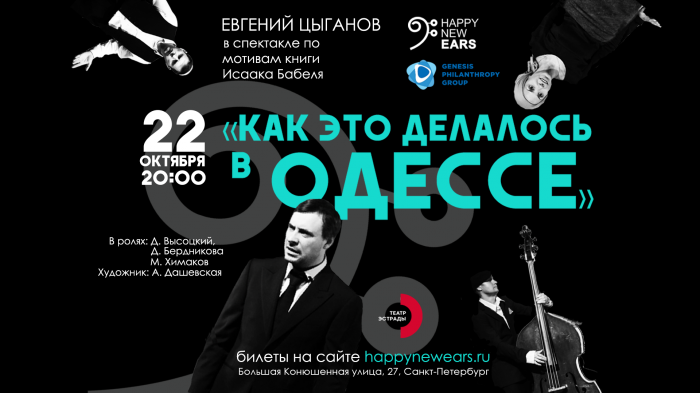 October 22 at the Variety Theatre. Arkady Raikin will show "How it was done in Odessa" - a theatrical musical production based on the book by Isaac Babel "Odessa stories" by Yevgeny Tsyganov in the title role.

The basis of performances was a series of stories by Isaac Babel about Odessa, the Odessa and the way of life of the last century. Despite the past hundred years, these stories do not lose their relevance and sound as if we were looking at the present, only through a different colorful prism. These people and stories that happen with them, virtually indistinguishable from our everyday life: the feast, the showdown taking sometimes unexpected turns, love, blackmail, gangsters with their often unexpected principles, foundations and social relationships — all this is true for the current us.

The heroes of stories — drayman, shopkeepers, bandits and smugglers — are closely linked and resemble one big noisy family. In his stories, Babel combines humour and tragedy with ease and talks about serious things: love and hate, life and death, morality and conscience. As simply and sincerely and the action takes place in the setting. The audience forgets that they are actors, in one breath, live one and a half hours of the play with his heroes. On the stage of love and hate, argue and blackmail, organize noisy feast and bloody showdown, and all this passionately and vividly.

In the center of the action, as in the stories of Babel, the son of a drayman benny Brick and his emergence as king of the criminal world of Odessa. Live music is in the play a special place: the double bass, trumpet, guitar and tambourine in the hands of the actors to the viewer the maximum passed to change the mood and atmosphere of the play. Premiere of "How it was done in Odessa" was held in London in June 2017.