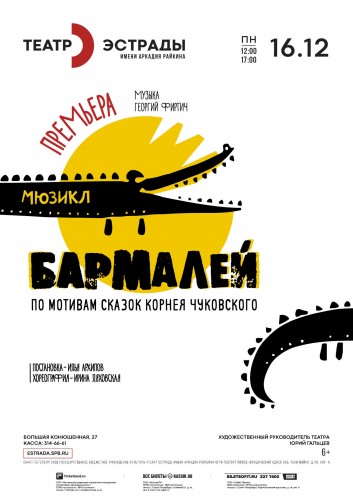 On 16 December at 12.00 and 17.00 in the Variety Theater show, the musical for all the family "Barmaley" musical hooliganism on motives of works of Korney Chukovsky! The performance was a real gift for fans of the genre and for those who are waiting from the theatre of entertainment and thrilling action. Meeting with characters, friends since childhood, will bring many discoveries. And the soundtrack, created by composer Georgy Firtich, be asked to the live performance and unbridled fun rhythm.

"What is important in the musical? Correctly, music. Simultaneously with the literary source inspired by the famous cartoon by David Cherkassky, "Doctor Aybolit", which sounds magnificent musical works by Georgy Firtich. Somehow they turned out to be undeservedly forgotten today, but we will correct the situation" - Ilya Arkhipov, Director

"Director's handwriting Arkhipova took shape already in the first independent work "BAJKI. Fairy tales for adults", original and extraordinary. Perhaps you can talk about the theatre Arkhipov, the form and content of which stem from the speed of modern life with its frantic pace and rapid development. It's theatre for preschoolers new era. The scenography is very simple – as an art Director was the Director – the focus takes on a telephone booth of Soviet times, appear bike, palm trees, sun, the, which in turn will be stolen by the Crocodile. Cutting-edge choreography Irina Lyakhov – permanent Arkhipov choreographer – with lightning fast movements, rhythmic variety, and the geometric lines of the dance – fiery and electric. In the play the music by Georgy Firtich written for the animated film by David Cherkassky, "Doctor Aybolit" (1984-1985). Original and expressive melodies classics cleverly arranged Timofei Maslov. It seems that around the Director gathers a team of people thinking and feeling close to him in terms of" - "St. Petersburg theatre"