The play "Hello, I your Aunt!" On January 23 in Saint-Petersburg 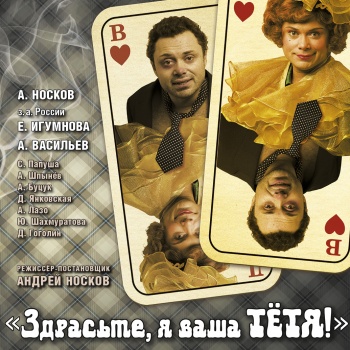 The story of an unemployed adventurer Babs of Moberley, by chance forced to "transform" into a charming Brazilian aunty-millionaire, is perfectly familiar to every viewer. In 1975, this role brilliantly played by Alexander Kalyagin in the movie "Hello, I your aunt!".

But few know that this hilarious Comedy has a very long and successful theatrical fate. Written in the late nineteenth century by the English playwright Brandon Thomas ' play "Charley's Aunt" was first staged at London's Royal theatre in 1892! They say the success of the play was so great that the lead actor was able for a fee to build their own theater... a Few years with an incredible sold out the play was on Broadway. She was raised in our country: the premiere took place in 1894 in the famous law, and the role of the "aunt" played one of the best comedians of the time – Pavel Orlenev.

It is worth noting that filmed this Comedy was not only in the USSR! The audience of Germany and America, Denmark and England, Austria and France also enjoyed watching the adventures of the enterprising adventurer Moberley. So Andrey Noskov, speaking as the Director of the play, and as a leading actor, was a very difficult task... How to create his version of the famous story without changing the story and keeping classic British humour?

Judging by the full houses at each performance, and genuine laughter in the audience, Andrey Noskov did it... the play moved to England in 1960-ies, a student residence of Oxford! Socks selflessly plays the role of a hapless student, who is playing a woman, creating on stage a spoiled eccentric millionaire. This "lady" is able to melt the heart of an old soldier, and turn the head of strict justice, and to help two couples in love. However, the main character also can not escape the arrows of Cupid, because love drives this crazy world.

Entangled plot, brilliant ensemble cast and sparkling humor – all this makes the Comedy "Hello, I Your aunt!" one of the most successful in the theatre's repertoire.