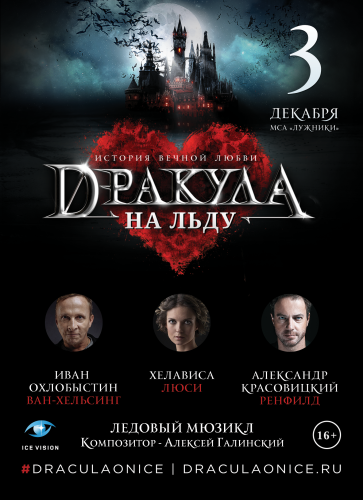 3 Dec at the Small Sports Arena of Luzhniki producer centre ICE VISION ice will present the mystical musical "Dracula. Eternal love story" based on the novel "Dracula" by Bram Stoker. In the preparation of the play was attended by famous Russian artists: Ivan Okhlobystin, Helavisa (band Mill), Alexander Krasovitsky (group Animal Jazz) and others.

The main roles are performed by soloists of the world ice show, ice acrobats, trapeze artists, appeared before the audience in the way the heroes of the novel: beloved Mine and Jonathan's, the young Lucy, the first of the fallen from the bite of a vampire,strong and courageous van Helsing, who devoted his life to fighting the dark forces, hungry and ruthless vampires and, of course, the sinister count Dracula. The role of the Mines – Catherine BACI, in the role of sinister Dracula –Valdis MiNTS.

The show's characters, voiced by famous actors, actors of theatre and cinema. Van Helsing – the undead hunter, doctor occult science and mystic, speaks with the voice of a popular Russian actor, writer and philosopher Ivan Okhlobystin. Helga, the leader of the group, the Mill will perform the song Lucy, charismatic friend Mina Harker, who became the first victim of the Count in London. Alexander Krasovitsky (the soloist of group Animal Jazz and Zero People) will perform a song Renfield – patient clinic for the mentally ill and a faithful servant of Dracula.

The audience will become participants of the show thanks to the technology of 3D-mapping and audio-light installations. The author of the soundtrack — a young St. Petersburg composer Alexey Galinsky, who wrote the music to the performances on ice: Princess Anastasia, "Alice in Wonderland", "Alice in Wonderland", "the Nutcracker and the Lord of darkness". Alex was the author of the work "Olympia", written especially for performances in figure skating at the Olympic games in Sochi 2014, as well as the soundtrack to the movie "shadow Boxing 3".

The end of the XIX century, London. Young lawyer Jonathan Harker and his beloved Mina are going to get married. But, on duty, Jonathan is forced to leave the bride and one for go to Transylvania to the old count,who wants to buy property in London...

THE PLACE FOR THE IMMORTAL VIEWERS

Bread and circuses! Exclusive "places of the Immortals" — a table for 6 in the stalls at the edge of the ice, right in the center from the moving action! The abundance of delicious dishes, seasoned by years of red wine, meat with "blood" and silver Cutlery – all this will protect the most desperate of viewers ice musical "Dracula" from the risk of being bitten by a passing vampire!

Enjoy your ice cold vampire hearts! Look into the eyes of Count Dracula himself! Feel part of the spirit world! This chance was given only to You, one out of 5,000 human souls in the audience!Buying a table is declared open! Count estimated 6 seats for spectators in the immortal 666 000 RUB.!

The Count will present "the immortal table" picture with his portrait, carried through the centuries and distance. The author of the pictures will leave an autograph of a real human blood!

See you at the Luzhniki stadium! Will be terribly interesting!