Marc and Denis from Caliban - conversation about a new album Gravity, collaboration and Russian tour

In the beginning of August Wacken Open Air, the greatest event in heavy-metal music world, is held annual in 50 km from Hamburg . MESMIKA did an interview with Marc Görtz (guitar) and Denis Schmidt (guitar/vocal) from metal core band Caliban at W:O:A 2016.

The first question will be about your album “Gravity”. This album is widely discussed in Russian community and very many people think that this album is very traditional - traditional for Caliban and Caliban is the band that shouldn’t be expected any experimental things. But it's great. What do you think about this album? Is it traditional for you?

Marc: I mean, it’s more traditional, then “Ghost Empire” and “I am Nemesis”, but it contains stuff from the past, some traditional, and some new elements. Like it depends what is new, and what is old, and what is traditional for you. Like I said “Nemesis” and “Ghost Empire” were like similar style, but not as heavy, as the new album. The “Gravity” is more heavy, has more rough-sounded, has some old-school elements, but, in general, it’s more continuing the way we took from the last two albums, not from past albums like “Shadow Hearts” or “The Opposite from Within” - nothing. In my opinion, it’s very different.

You have some collaborations with other artists. For example, you have released a new song with Die Krupps - “Alive in a Glass Cage”. Why did you decide to work with them?

Marc: No, it was some kind of coincidence, because I have a studio. I’m a recording engineer, mixing engineer and they came to me with a question, if I do a metal remix of one of their songs for them. They have released this song originally already before, and then they asking me if I can do like metal-version, more Caliban-style version of their song, and I did this. Then I sent it out to the guys, and they were very happy about the result: “Aah! It’s so great! May we can do some kind of collaboration, and you ask Andy to scream?” And I took Andy in my studio, he did some scream, but it’s definitely more Krupp’s song, than Caliban’s. I just made it heavy, made it metal but the way it’s arranged in everything traditionally comes from Krupp’s.

Denis: Actually, we did a couple of albums with them, so I don’t think we will work with them one more time. We’re really happy with the guy we have now, so I think this will fit the best.

Marc: Yeah, that production team we have, the way we work with them together, and producing, recording: everything is very well. Through the years we're very well working team, and we don’t think we gonna change that, so, because it's working out this way perfectly. I don’t know, who knows, what if we will work with Anders again, but it doesn’t look like that at the moment.

The most favourite songs for Russian fans: “I Rape Myself”, “A Memorial”, “Nothing is Forever”. But what’s your favourite song in Caliban?

Marc: In my mind, I think that definitely is different for both us.

Denis: Right now, I think it’s the same. For me it’s “Infernal” right now from the new album.

This year you’ll have a big Russian tour. It’s not the first tour for you, but what city have you never been in Russia, but you will go this year. And how did you choose Russian cities?

Marc: It’s not like that we personally go and choose each city. It’s like that: we have a Russian booking agency, and when they’re asking: “You wanna tour in Russia?” we said “Yes, of course” Because last tour we did, our last couple of tours we did were great. And we did one tour for five weeks ...

Marc: And they’re putting together cities mostly. We just name a few cities where we have been before and we really liked it, so they want we come back there, and they choose some new cities as well, as we have never been, but it’s not like that: we go through the map and see...We haven't been here - so, let’s go! It’s like they are choosing the cities and suggesting them to us.

Denis: But I heard, that on this tour there is a city, I don’t know, which one, where never played band from another land. I can’t remember, which one, but I heard that. 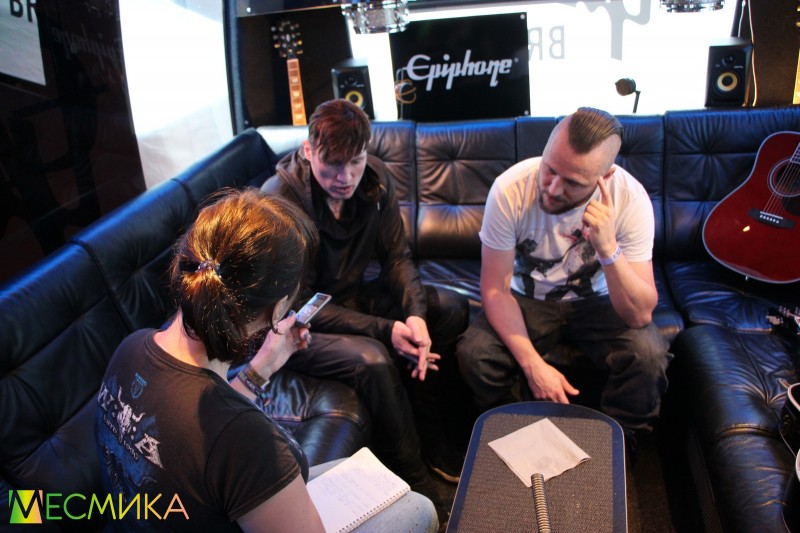