"Children of the atomic stations" in Moscow "Theater" 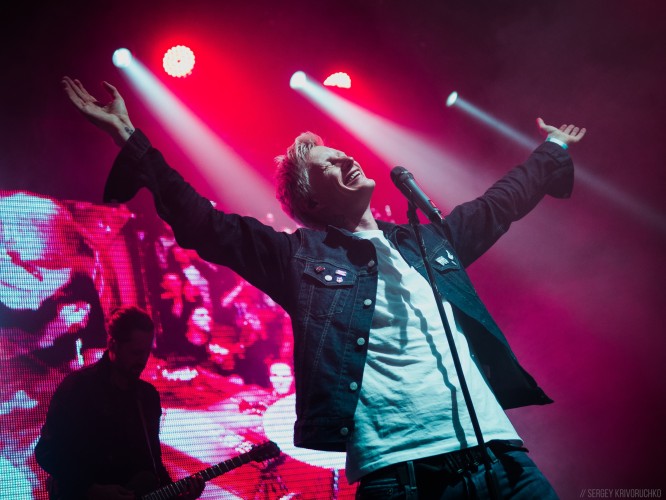 21 September in the capital club “Theater” was a big solo concert Jane Air. The boys presented their recently released EP, “children of the atomic stations” and of course do not forget about the old stuff.

Promised a year ago the EP “children of the atomic stations” was released in March of this year, then what honestly Anton Lissa and his team warned its fans. And finally, the Muscovites and Petersburgers have the opportunity to hear the new material live. In Moscow, like almost a year ago, Jane Air broke into the club “Theatre”. And worth noting, in this time the people were so much more - whether affected a small number of concerts, whether the EP really “gone”, but on 21 September the Theatre was full. And despite the fact that the metro station “Bagrationovskaya” was closed, and the warm days quickly turned truly chilly autumn weather - for fans of Jane Air is not a problem.

The club “Theatre” has already secured its status as a platform medium in size and in Moscow - it is larger than the Glavklub and much less than Adrenaline. And just perfect for these concerts, when guests will be going under 2,000 people. Given the bad weather and the day, to start the group decided early - on stage, the musicians appeared soon after 20.00.

Started mostly with junk - good and time-tested. In the first concert block was the song “Love love”, “My heart is an open wound”, “Juliet”. Fans of these names immediately says a lot.

Immediately after that, it's time to try out new material live - performed “On the old Nevsky,” which in concert have acquired bass and reviewim sound. Followed by the title “children of the atomic stations”, which were created for these performances - a vivid theme electronic live sounds from the stage simply fire.

Before another new song, “Death rave”, was heard several old songs, among which were the remarkable “Slowing down speeding up the night”. The very same “Death rave” fit into the setlist perfectly.

Once again I want to note how cool Jane Air live. You will seldom see on the stage the group is absolutely and 100% gets pleasure from what is happening. These guys are always just so. Whether it is the “My pack” where Anton went down into the crowd, or “Glass of glass”, or mental “Paris” - it was always clear that the group missed the live performances and the audience - by their idols.

Closer to the end of the show there were certainly no proven fighters - “Chemical revolution,” “the Queen is fake” - which, by the way, this time was played as a particularly dirty and driving - of course “Junk”, according to tradition executable in unison, “Can-Can”, “Geisha ninja killer”, “Volcanoes”..

Just a great choice of setlist, and probably the coolest thing of the new song is wonderful it fit, adding the rave wave concert.

Thank you to the band for the wonderful concert and new material. Now I would like a full LP and a tour of Russia, but as they say, everything is in the hands of Anton and his group!