Sergei Mavrin. Presentation of the instrumental program "Infitity" in Kazan 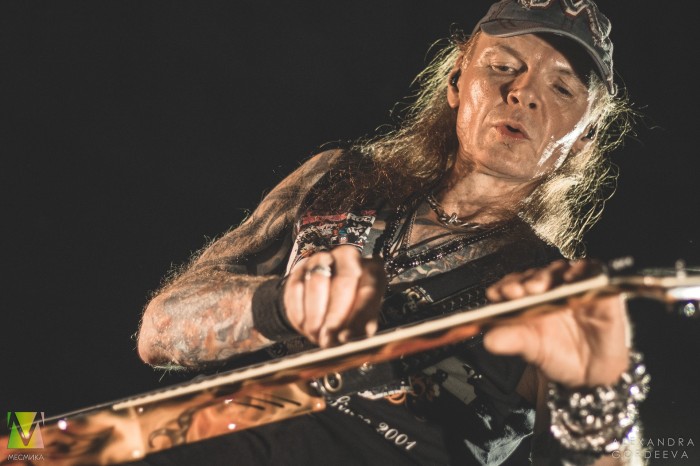 Probably not on our rock scene the figures are more reputable and respected than the brilliant virtuoso guitarist, composer and sound designer Sergey Konstantinovich Mavrin, whose name is inseparably connected with the group "Black coffee", "Metallakkord","Aria" and"Kipelov" and the rock-n-roll experience is measured by three decades. It is not surprising that the band "Mavrin" and his solo instrumental performances still generate much interest among the public. Was no exception and on September 27, the evening of the musician in "BigTwinBar",attended by several hundred Kazan fans Mavrina (by the way, anyone knows Sergey Konstantinovicha to 12 years lived in the capital of Tatarstan, after which his parents moved to Moscow).

The format of such performances, in which C. K. plays instrumental pieces (watch his technique, popularly referred to as Maringa, private pleasure) and answer questions from the hall, appeared in 2008 and since then is gaining momentum. Mavrin has released two instrumental albums ("Echoes" (2015) and "White sun" (2017) and generally toured with solo concerts almost if not more than with a group. It is seen that the musician gets no less pleasure from these meetings than the public. Such things in the scene to simulate, in my opinion, possible.

Let us, however, to the Kazan concert. On it one after another sounded songs like "White sun","Forbidden reality","Illusion","Wings","Infinity","Waltz","Echoes","Altair",a mash-up. "Careless angel", etc. In between tracks Sergej, answering questions, briefly spoke about his vegetarianism, finding their own music style, love of Ritchie Blackmore, childhood in Kazan, the impression of biographical films about rockers, relationships with Kipelov and Aria, working as a radio presenter with the program "Iron curtain", the upcoming new album (we wait for it for at least a year!), his own technique of playing the guitar, the history of the song "Wings" and much more. Among other things, I remembered a question one of the fans, warmly interested in the personal life of a musician (in particular, her care, an official Mavrina wife or informal)."Favorite" – with a smile replied the guitarist, prompting a flurry of applause in the hall. Also curious to listen to the memories of Sergei Konstantinovich presented him once the cake with the image of his hands when cutting which he had mixed feelings.

Overall, the concert, of course, failed, which confirmed and unceasing applause, the musician arranged at the end of the speech, and a huge queue lined up for his autograph. Before leaving S. K. promised to visit his childhood town in the next six months, this time together with the band "Mavrin". What the next concert will once again be a sold out no doubt.