Crown The Empire at club Cosmonaut 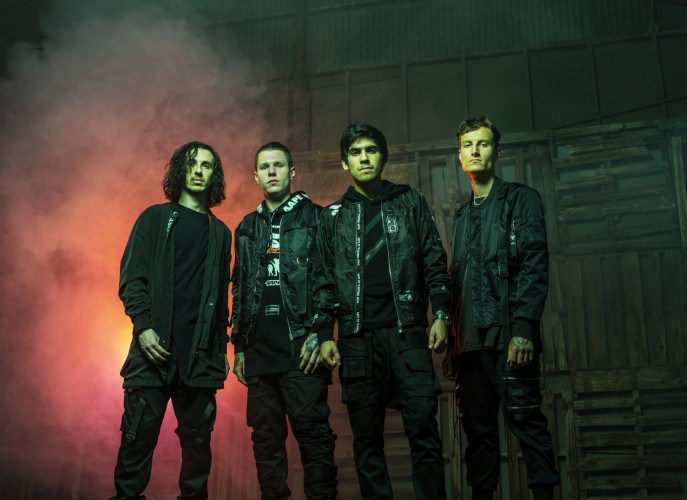 In the 2000s the years, more and more began to appear of young metalcore and post-hardcore groups of astonishing originality and own sound, attracting attention of different labels, ready to put their money in their development. But time has shown that every were until 2019 got not many. The most persistent still exist and have a significant weight in the modern metal scene.

One of these bands are Crown The Empire. The boys were born in 2010 in Dallas, Texas. Creating a group in school, they 2 years later has signed a record contract and recorded his first Studio album, went on tour, what was tolsey their popularity.

During these 9 years the composition has changed and now the group of four musicians: frontman Andrew Velasquez, solo guitar Brandon Hoover, responsible for bass guitar and extreme vocals and Hendaye Three drums Brent Teddy. Also changed the style of their music. From heavy metalcore sound, they moved on to more alternative.

Crown The Empire has released four Studio albums, the last one was published on 19 July this year, which was called "Sudden Sky". It is in support of it, they went on a world tour, taking a couple of Russian cities.

In Saint Petersburg the concert took place at the club Cosmonaut and a full house on it unfortunately was not. It's a little less than half of the hall, which of course is very convenient as there is no second-hand market, but for the artist and organizer, it's not a particularly positive indicator. Warm up this evening, it was not all stood quietly waiting for the upcoming shows.

At 20.30 began to play an Intro called "(X)" and on stage welcoming the audience the guys came out and performed "Sudden Sky". Immediately they played "The Fallout" and "Memories of a Broken Heart", after which Andrew delivered the opening speech: "Hello Saint-Petersburg! This is a group of Crown The Empire and we are glad to see you again!” and performed the song "20/20".

"Recently we released a new album "Sudden Sky" and we went with his presentation to you, - said Andrew - and now you will hear the song "What i am", we had the single." Then was fulfilled checked boevichkov "Zero" and "Hologram".

The Ura has adopted a new song called "Red Pills". Under the familiar "Johnny Ringo", the hall came to life and there are few who just stood there. The impression was that with so many people, movement is little, but it wasn't. Slam during the concert was good and aggressive.

The song "Millennia", Andrew and guitarist Brandon Hoover, played in acoustic version, and the hall has supported all of this by lantern light. Further in the fight again went the heavy artillery in the form of "Bloodline" and "Machines".

"How would it not sound sad, but there are only 3 songs," said Andrew and the band played "BLURRY", "MZRY" and "Makeshift Chemistry", and then said goodbye and left the stage. After about 10 minutes, you guys shorthanded, down the hall and gave fans a bit of his time giving autographs and having selfies on the memory.

The next concert left a good impression behind. The professionalism of these guys, great clean vocals, good sound, what else need for a good night. Is that “thank you” svetovykh, if you can call it that. The light was terrible. But otherwise, what the people wanted, he got from the show Crown The Empire.