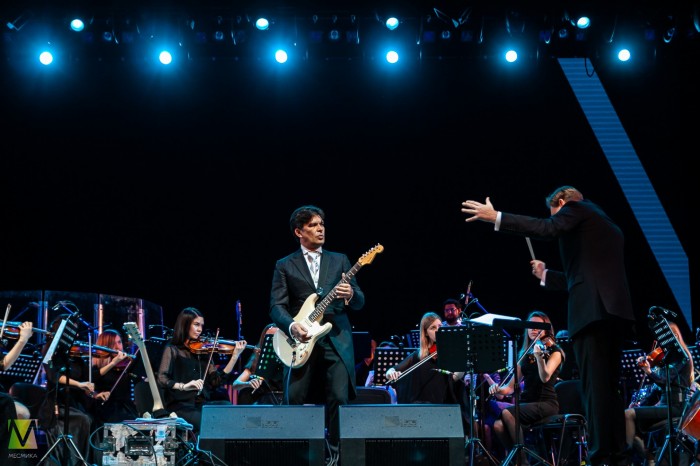 There are concerts, which is worth visiting at least once in your life, even if you are not a big fan of rock music. The project "Symphonic Cinema", definitely falls into that category. The combination of expressive guitar Yuri Kasparian, a famous guitarist of the band "Kino", orchestral arrangements of Igor Vdovin and music symphonic orchestra, has on the viewer just a lasting impression, quickly taking possession of his attention and helping to re-experience the melody, the beauty and uniqueness of the songs of group "Cinema".

Not surprisingly, the day of the concert in Kazan (October 16, RK "Pyramid"), the audience, 80 percent consisted of young people so rapidly and happily greeted each and every song and enjoy singing along to your favorite tunes, which he obviously knew by heart from childhood. A pleasant impression is completed and broadcasted on the screens visuals created by the producer of the project Alexander Tsoi (thereby, Yes). Special mention deserves and how delicately and respectfully, the creators of "Symphonic Cinema" came to an understanding of the heritage of the legendary group, deliberately focusing solely on music (Yuri Kasparyan, it seems, did all the speech did not utter a word). But someone unscrupulous could turn it all into a farce, finding similar in appearance to Viktor Tsoi singer (it was a group of "Doors", speaking in Moscow in 2011 with a clone of Jim Morrison), or by generating a hologram. Especially in show business is widely believed that the Russians to instrumental music in the mass, indifferent and perceive only song genre with the obligatory verses and choruses. Partly, that may be so, but judging by the incessant applause, the shouts of "Bravo" and applause at the Kazan concert to the works of Viktor Tsoi and "Kino" this rule clearly does not apply. Moreover, many present in the room noted that the orchestral version has allowed them to re-evaluate the scale, melody and the depth of the original tracks of the group.

The particular euphoria and the joy of the audience called such netlenki as "the Star named the Sun", "Cuckoo", "Change", "Pack of cigarettes", "Sadness" and "Quiet night". However, the other heard at the concert of composition (there were 21), as noted above, was met by a chorus of approval and enthusiasm of the hall.

P. S: special thanks to the organizers for the opportunity to purchase in the foyer of the licensed merch, vinyl records and CDs related to

the project "Symphonic Cinema" and "Cinema" itself. Among them, in particular, are such unique releases as a luxury three-disc Deluxe reissue of the album "Blood" (1988). On stage as a great release of the album "a Star named the Sun". Read more about these publications can be found on the website of the label "Maschina Records (https://zbsrecords.ru).