The Rasmus in St. Petersburg 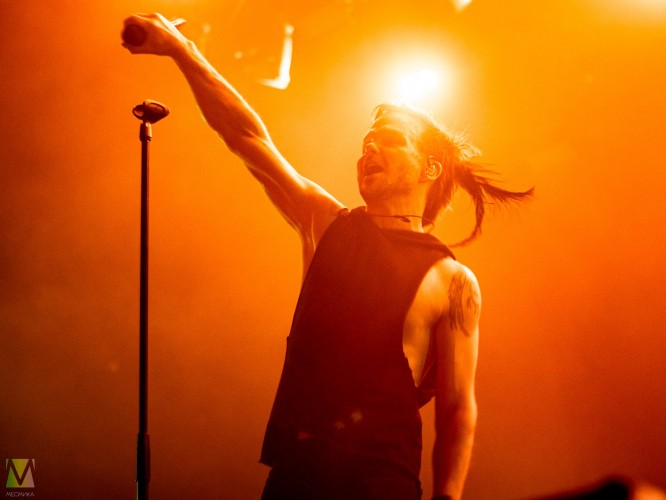 Remember MTV when it was showing "Beavis and Butthead" and "Pimp my ride", and music not divided in styles? So The Rasmus we know that a great time.

If you now close the eyes and remember the clip "In the Shadows", I could clearly remember the white room where is a group, and Lauri with crow feathers in his hair singing a simple and catchy chorus that after all this time not to forget. Ask any person if he knows The Rasmus and he's going to sing the famous "OO-OO in the shadow for my life".

So, last year the group was the anniversary of their fifth Studio album "Dead Letters" and this thing they decided to celebrate the world tour. Since Russia guys love the Northern capital also got a piece of that holiday pie. A jubilee concert was held on 3 November in A2 club Green Concert and of course a full house.

The evening began to warm up and the group opening the concert were the Moscow rockers TattooIn who did a great job and was very warmly received by the audience.

20:30 the lights went out and joined the screen which showed footage clips of The Rasmus, but this time on stage one by one began to appear the heroes of the occasion that after the video opened the concert with the song "First Day of My Life". Then without hesitation, was performed "In The Shadow", well, every song of the album "Dead Letters" in the order in which it on the record.

Having played all ten tracks from this album, appeared on the scene four bar chairs and a drum which took the place of drummer Aki Hakala, the edge sat down with bass player Eero Heinonen, and with acoustic guitars took their seats Pauli Rantasalmi and Lauri Ylinen. Very nice boltov in between, they played "Sail Away", "No Fear" and "Liquid" in acoustics.

A little rest and popes all rooms in a warm atmosphere, it's time again to hit the rock. "Night After Night", "Lucifer's Angel", "Dead Promises", "Bullet", "F-F-F-Falling" was heard from the boys in one breath, and in the hall you would just hear the cries of happiness when they started playing their favorite song. The boys finished their concert beautiful "Livin' in a World Without You", and then said goodbye and left the stage.

The hall went mad and began to shout and ask the group to come back and The Rasmus came on for one last song. Playing "Last Waltz", on the screen appeared a large Russian flag with the group name, and then the guys bowed and went to rest and to go home.

The concert was absolutely smooth breathing. Every song the crowd sang with great warmth and love, as for many this album is their youth or even childhood. And how cool to those who came to the concert of The Rasmus for the first time. This concert they will clearly not forget. In turn, they promised to return and knowing them, they will keep their promises.