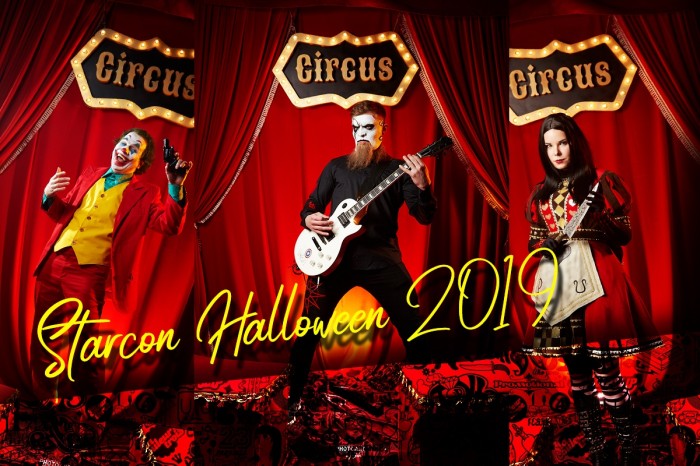 Notice: Undefined index: wrap_width in /myarea/web/mesmika/public_html/templates/boxed/content/default_item.tpl.php on line 49
>
Photo source:
the press service of the festival

10 interactive booths and ominous scenery, carnival, 500 participants in the images of favorite characters, unique themed fair, screenings of films, chat with artists and bloggers, performances of magicians, jugglers and acrobats have created a unique atmosphere of the festival.

In St. Petersburg ended the festival of fiction, science and personal expression of STARKON HALLOWEEN. Online broadcast watched thousands of viewers in different countries. "Night of rotten tomatoes," pickevent, night party, fair – all these diverse elements together STARKON HALLOWEEN. 300 images from different fandoms participated in the cosplay contest. 700 people attended the gala party in the night from Saturday to Sunday.

On the Main stage the audience waited for the parade shows and performances. Circus "Fantasity" showed a special programme and illusions, and "Jump Energy" has prepared a fascinating show on Jarrah. The audience could see flip on the 3-meter height, as well as a special solo number on the ring.

The parade of fantastic universes and their monasteries traditionally creates a special atmosphere of the festival. This year the fan stands were 10 and almost everything is interactive. Exhibition area introduced the visitors with ten fantastic universes and allowed us to get into a real traveling circus and visit the wild West saloon fight in battle tournaments to test their strength in battle with zombies.

Art zone "of Starcon" was introduced to the amazing artists, sculptors and authors of comics. "Utopia Show" and "the Other publisher" presented the new comic. The festival started selling comics "Stan Lee meets Marvel heroes" . Publishing house "Wizart" revealed the continuation of the graphic novel "the New centurion" with exclusive artwork for the festival "StarKON: Halloween"."Wunderground" taught guests the basics of animation on the event. Also in the art area, you can apply the makeup yourself or is completely free to get a tattoo with the symbol of Starcon in the theme of Halloween.

For moviegoers "StarKON" together with the "Other movie" was prepared by screening the cult film by David Fincher "Fight club", as well as the film Stanley Kubrick's "eyes wide shut". Lovers of night hits was waiting for "Night of horror".

A play area prepared for preschool scale, which attracted the attention of not only adult fans nastolok and PC, but also children. Especially for "StarKON: Halloween" has created a unique version of the game "Secret Pennywise". A "Chronospace" prepared VRаттракцион with horror. On the basis of the play areas was held the tournament in Mortal Kombat 11.

For adventurers "StarKON" prepared and conducted a fascinating quest through a fantastic universe. Heroes quest was waiting on the stands with tasks of different complexity. Best prizes were given to the one who took the quest from beginning to end.

Traditionally, the festival was the cosplay contest. This year the participants have adapted the images of familiar characters under the circus theme and competed in 10 different categories for prizes from the festival partners.

The first day of the festival ended with a terrifyingly loud: guests enjoyed the night party with showprogramme and dancing.

Organizer of the festival: event-Agency "Geekers"