The Moscow audience fell in love with Irina Amirova 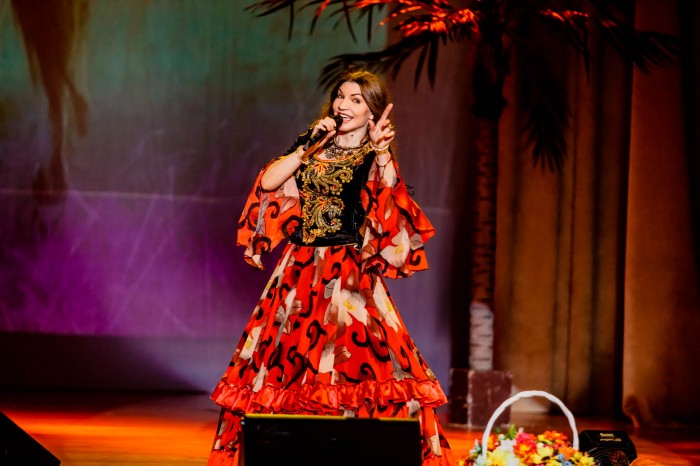 Very positive, super dynamic oslepitelno Archicontest singer from Saint Petersburg, Irina Mirovoi took place on 28 October in DK. Zuev in Moscow! It was volitelny special night for the artist, because the concert was the debut in the capital, and unconditionally conquered the inhabitants of Moscow.

After people took their seats in the hall, which, incidentally, was filled to capacity, the waiter brought large wicker baskets with chocolates. Everyone willingly treated them thus for a time getting to the carefree childhood and zabyvai all your worries and daily routine.

And here is the beginning of a long-awaited concert —Irina Emirova fluttered on stage, warmly welcoming their guests!Samogo the first moment everyone in salariato surprised by the unusual, but at the same time simple, sincere and incredibly positive behaviour Irina on stage. And, inspired by this openness of the artist, all relaxed, danced on the ground, smiled and loudly applauded Irina. Without any hesitation she went down the hall, finally erasing the boundary relationships with the public. Irina paid attention to everyone. And it turned out it's just brilliant, because most of my life Emirova Irina worked as a psychologist and helped people to cope with life's problems and different addictions. She is a true professional who is noticed all who attended the concert, "You know, this is an amazing positive person carrying some joy and really uplifting. It is so different, so sincere. It is felt that there is a positive energy, maybe because she's a psychologist and knows how to feel the audience. Very pleasant experience, thank you very much!" - shared her emotions the guest of the concert.

Three hours passed like one moment – so rich and multifaceted it turned out the debut of Irina in the capital. Were songs about love, sadness, quirky fun (for example the song about the Russian bath, where people issued bath robes, caps and with brooms in hand, danced on stage with the singer), and much more. One woman guest at the concert, shared his impressions about the songs Irene: "She gave a positive touch to everyone! I wanted to create, to love and, as she says Irina, to soar. And the songs she sang – the real truth about many women's stories!"

All were fascinated by Irina and after concertana met her personally, talked, took pictures and got an autograph. Most who came to the concert, did not expect such a powerful sarada positive energy! Experience people speak for themselves: "We came today to the concert of Irina Mirovoy and us-very much. She lacasadialice! Lit just all! We danced, had fun, got gifts. Everything was great, and the voice of her... She is a human with a soul, seen it, done! We are waiting for you in Moscow again, Ira!"