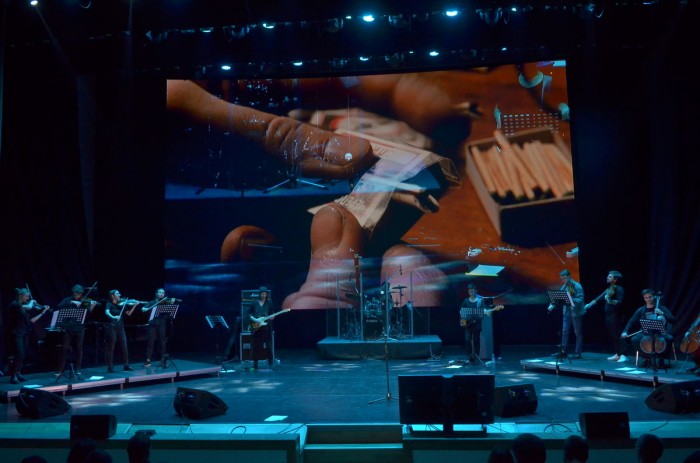 On November 17 the stage of the Congress center. G. V. Plekhanov rocked the concert in the format of a Live Soundtrack to the cult film "Brother" and "Brother 2" performed by the rock-orchestra Orchestra Imperialis.

The concert was very atmospheric and unusual. And the audience this evening, as he was very diverse: from students to the older generation, are experiencing the "rise of the 90s" in their own skin. The hall was Packed, tickets were sold out in a few days before the event.

To be honest, until recently, was not that the organizers have prepared, in fact, except for the unusual orchestra of Russia, it has not been claimed by other artists.

Even before the event has caught the eye of a huge screen directly above the stage, which was adorned with a poster of the event. And immediately after the third bell hall was filled with the first sounds of the splash of the film company CTV. Could be no doubt – it was a living sound.

On the screen flashed the first images from the film by Alexei Balabanov "Brother." Beloved hero of the era 90- Danila Bagrov, in the performance of Sergei Bodrov, got to shooting the video for "Nautilus Pompilius". "Wings" - with this song and the concert began. On stage were the musicians of the orchestra being Orchestra and soloist in black glasses, who skillfully imitated the manner of performance of Vyacheslav Butusova.

"Gentle vampire", "In the rain", "Black birds" began to sound from the stage one after another.

Suddenly there was a second vocalist – Xenia Colombica, who performed everyone's favorite "flying Frigate" and "free" Nastia Poleva, and "clap Clap" Vyacheslav Butusov. And, it should be noted that the male songs were given to the artist not less emotionally and vividly.

Despite the rock focus, the concert was still for the most part, academic, therefore, assumed the intermission. A second logical compartment was reserved for the soundtrack of "Brother 2". On the screen flashed the most significant bit of the movie.

Vocalist Artem Menshikov, this time successfully to transform into other heroes of Russian rock. From the stage sounded all your favorite hits "Agatha Christie", "spleen", "Auktyon", "Okean Elzy" and "Semantic hallucinations".

Xenia well lit room songs "Zemfira" and "Chicherina", where she sang the whole room. It is impossible not to mention her sensual performance of the song "Earth" of the group "Masha and bears". The audience gave a generous applause to the singer.

Very unusual song "Kathmandu" group "the Crematorium". She played the saxophone Taras Gusarov, and not just so, and riding around the stage on gyrometer. Agree, this is really most unusual orchestra of Russia!

In conclusion of the evening sounded the hits of all time from "Nautilus Pompilius" - "the Last letter" (or, to put it more simply, "goodbye, America!").

Encore Imperialis Orchestra performed the "Colonel" Bi-2 than very pleased with the excited audience. In the end were presented to all the musicians who made this evening unforgettable, and also the presentation of the disc and a friendly auction at which the last instance of the first orchestral album found its happy owner.