Alice. "Posolon" - a new look at the autumn sun 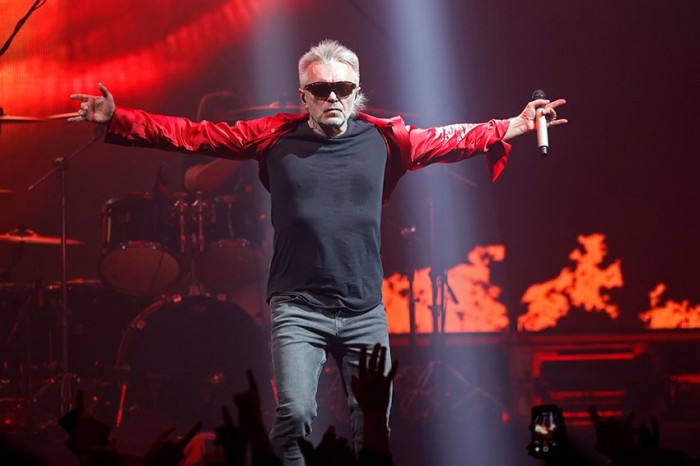 16 Nov Adrenaline in the Moscow Stadium "Alice" presented their new album "Posolon". Everyone was so excited, so right after entering the hall were chanting the band's name and applauded. The concert started with a countdown projected on the wall. The stage tumbled down a smoke, among which effectively stood Konstantin Evgenevich.

The first song played was the same album – "Posolon". Followed by "rain" and "Here", and guitarist Paul Selicki pleased with all who came his game. "Cursed days" Kinchev played the acoustic guitar, and Dmitry Parfenov on the brass melody. During the song "going North" in space, infused with light, has released a white confetti. Alizamani one after the other began to raise the flags of "Alice". This evening was played not only new songs but also old hits like "angel" from the album "Sabotage".

The crowd and the band were inspired by the same energy. Fans tried to show their enthusiasm: jumping, shouting, raised hands, showing all the rockers, the goat. Constantine, unlike many other artists, was laconic. All night he said just a few words, and the rest of the time was spent singing songs.

When I heard the song "Echelon", everyone froze, hearing the lyrical chords. Ispolnenie finished, the musicians left the stage. There was one Selecki, who performed a soulful guitar solo. Back on deck, the singer together with his team performed "a Decoction of snags", "Moscow" and "Escape". Then all those who came heard a solo from drummer – Andrew Vdovichenko. During his game spellbound the audience almost didn't stop to applaud

The group, reemerging in full composition, performed "Red on black", and fans started throwing up on stage in their scarves. When the musicians played "April", it seemed that the area of the entrance began to shrink, slam began on all sides. Anyone who wanted to participate but couldn't get in the middle, formed their own circle. Playing "March", soloist effectively put the guitar on a stand and the whole team went behind the scenes. Admirers asked musicians to come back, so they played for an encore.

The first sounded the song "Southpaw".

For dessert for Alismanov sang "favor". In the entrance flashed red fireworks, while the crowd sang along with kinchevym louder and louder.

Thanking the fans, Konstantin Evgenievich companions invited all to a meeting in honor of his birthday, the upcoming December 28 at Izvestia Hall, and disappeared in the artificial smoke filled the room in just a few seconds.