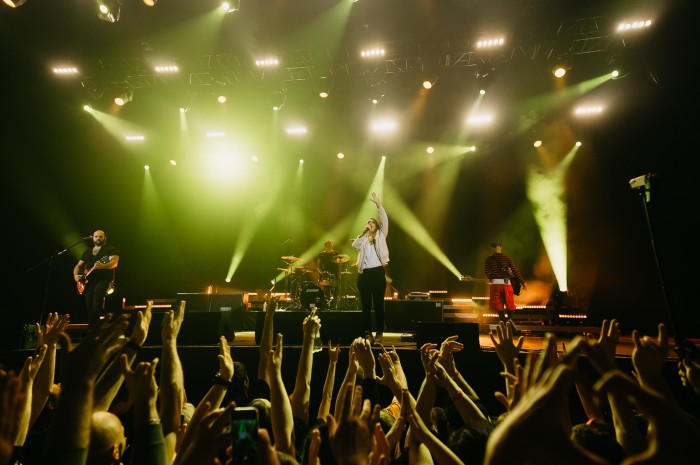 17 November the Moscow club Stadium Adrenaline lined the seemingly endless procession of people willing to listen and to witness firsthand the German Quartet Guano Apes. The group this year marks the 25th anniversary of such an event simply not to be missed.

To warm up the audience before the release of the guru of alternative rock fell out of the newly made Russian group OutKast. A pleasant surprise was that the band members are members of the "Golden part" Amatory Igor Kapranov, Alexander Pavlov and Dmitry Rubanovskiy. Their debut, appropriately titled, single, "Phoenix" was first performed on the big stage. On the platform were seen the crew AllStarTv, and this suggests that soon will the video Live version. The musicians gave full. The room literally glowed with heat. Unfortunately not everyone was able to catch a performance OutKast. Many listeners came to the club only to start GuanoApes.

"So wonderful to be back again in Moscow," greeted his fans Sandra Nasic.

No sooner had ceased to vibrate the chords for the first song "You Can't Stop Me" and "Quietly", and the hall was already shaking.

In between songs Sandra actively communicated with the audience, not forgetting to thank the audience – "THANK you! You are all very cute! Den here we have not really cute... He told us once said that humans and monkeys have a lot in common. That's why we named our group “Guano Apes”. And even music will help to make sure that everything was cool!"

Fans constantly chanted the name of your favorite band and enjoyed singing the familiar words of the songs "Close to the Sun", "Open Your Eyes", "Pretty in Scarlet" and others.

"Take off your clothes! I want to see naked people free naked people! And the next song is just for you, because you are free!" - shouted Nasic into the crowd before a performance of "Suzie". On the dance floor the atmosphere of utter madness. The band rocked the club in full.

"Did you like the show? I liked the Mosh pit! Oh and girls, here is for whom was all my passion! During the next song I want to feel your energy! Give?! There's only one person in the universe who I would really like to meet Nikola Tesla! Gimmeallyourenergy!". Surprisingly, during the performance of "Lordsoftheboards" the club is not blown to pieces by a powerful splash of energy.

Not without mi-mi-Mishnah gifts. Sandra gave a huge bouquet of roses, thanking her and the band for making this!

This evening on the stage sounded familiar and all favorite songs GuanoApes, written over a 25-year history. Anniversary was a success! Please repeat for an encore!

You Can't Stop Me

We Use the Pain

Close to the Sun

Oh What a Night

Lords of the Boards