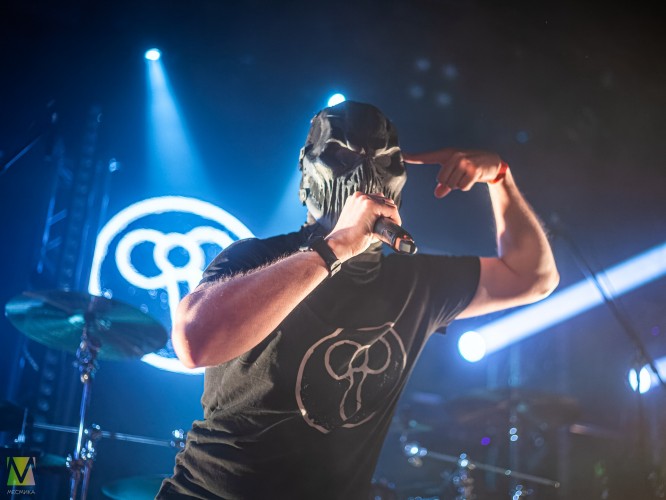 On the first day of the last month of winter topic this year Pneumocolon presented in the Moscow club Izvestia Hall album "Tooth of a famous person".

People long to freeze on the street and the door swung open almost welcomingly at 19.00. The first came almost immediately surrounded the table with merch. Also many people in the crowd were seen in t-shirt Lord with the image of "elephant". Most loyal fans immediately took a place near the stage, talking among themselves and without departing from the choicest places. The club played nice music, and on stage from time to time moved technical staff. At some point, was handed a giant tooth, which hinted at the cause for which the concert was held.

Closer to 20.00 a hall well filled with people, the crowd chanted the band's name, joking that the time goes only the spleen and shared expectations of the concert. When the Lord came up on stage under cotton and sprinkle on the confetti crowd, it became clear that was collected almost sold out.

Pneumocolon I asked the audience "How you doing? How are you?", explained that the concert program will be divided into two parts, between which is a recess of ten minutes, just played 30 songs, and made a welcome word track "a Tooth of a famous person", throwing the above mentioned artifact in the crowd.

Then followed the song "If I would women are not ** be", where the fans staged a fierce slam. Except for the first song from the new album were played all tracks are mixed with well-known, such as "Waving ***mi", "Princess", "Hell adok", "Serge", "hand Kicking" and "Went all PU**".

To show that such a catastrophic ***ETS, the Lord divided the crowd into two parts and made a "wall to wall".

After the final song "plant a **holes," the audience didn't want the actors to go and Pneumocolon a few minutes delighted the audience.

A fun and percussive Lord Pneumocolon presented their new album. Now we know who owns the tooth of a famous person and will wait for the new top hits!