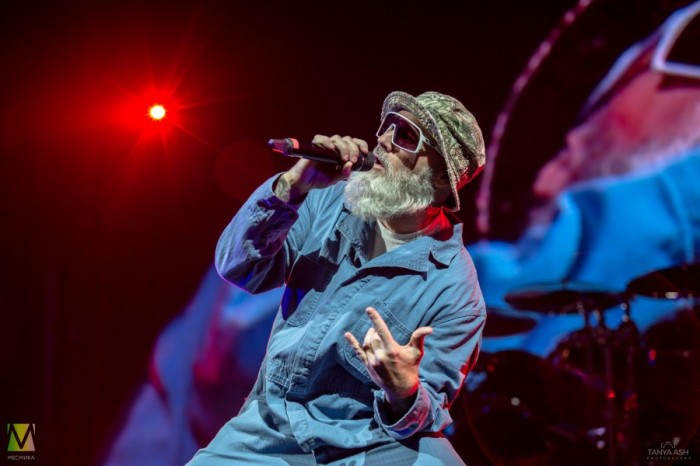 Frankly, the expectations were full of memorable, already distant 2000's, kutovyi reefs alternating with aggressive rap flow Fred and the musicians jumped around the stage, setting the stage for hall. This Saturday night, did not have long to languish in the queue – people were coming in advance, the number of passages through screening has increased, volunteers organized the aisle. The organizers took into account their mistakes that much happy. Therefore, nothing prevents to concentrate on the event itself.

In all cities the special guests were the electronics Blvck Ceilingи Ic3peak. Both by representatives of the domestic shop directions Veatch house. They presented a short but informative program, which helped the audience does not get bored waiting. Not to mention that the music guys have interesting, fascinating, energetic – excellent summed to the main course of the evening.

But when he appeared on the scene LimpBizkit – the hall has been Packed, literally, the Apple was nowhere to fall. Even got a little scared for design on the seats, because everything jumped under the immortal hit Rollin' (Air Raid Vehicle)!

Fred heartily welcomed the audience: "Thank you for taking the Limp Bizkit at home, we are very happy to be here!". Hall and answered him in kind – each song held on the same wavelength, in the full pair. "You are lucky, you are in a special time. And we have a time machine. Today 1999, as it always will be" - with these words began My Generation!

First division passed in one breath - all naprygalis have natolknulis in mosnita, and the musicians decided to give a break to yourself and the audience.

In the second part of Limp Bizkit diluted your setlist for an acoustic performance of songs by Led Zeppelin and TheWho, a dynamic mix of Green Day and Nirvana. By the way, were guest musicians: Mike Muir of Suicidal Tendencies performed the song along with Fred and a young singer Nisha STar, which the band performed a cover, again for Suicidal Tendencies! The audience warmly welcomed the guests, and the hall filled with a very warm atmosphere.

And completed his heavy duty concert a hit and the soundtrack to Mission Impossible 2 – Take a Look Around. The evening was insanely warm, with the sea drive and positive. One of the best concerts this year for the organization, the impact of musicians and audience reception. Before the meeting, LimpBizkit! We know that you prepare the album, and waiting for you with new songs as soon as possible!

View photos from the concert.